The Mother of all Cures

You know that scratchy feeling you get in the back of your throat when you’re just starting to come down with a cold? Yes, you know the one… that dreadful little tickle that means “Batten down the hatches! You are about to feel absolutely miserable.”

Well, last Friday night, after I had finally gotten all the kids to bed, poured a(nother) nice big fishbowl of wine, and put my feet up… I felt that tickle.

My husband had already succumbed to the grippe a few days earlier, so, statistically speaking, I knew it was my turn. Even with all the hand washing and Lysol spraying and Hazmat suit wearing, I felt like the odds were not in my favor.

But I would be damned if I wasn’t going to put up a good fight. 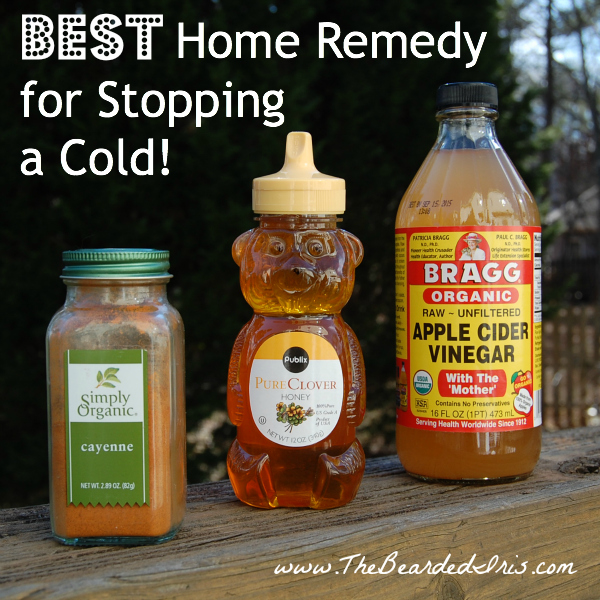 I stirred it up and sucked it down. Then I went right to bed.

The next morning, I was right as rain. Okay, maybe acid rain on the outskirts of Three Mile Island, but still, the point is… I was NOT SICK. The scratchy throat was gone. My nose was not stuffy. My head did not hurt. Score: Iris 1, Cold 0! Booo-yah!

My poor husband did not drink my Witches Brew early enough in his little cold. He used the classic male cold remedy called “denial,” and it totally didn’t work.

As you surely know, I am not a medical doctor. But this is the second time this year I’ve used this little Witches Brew and it is the second time I’ve avoided getting sick. I’m not exactly sure why it works, I only know that it does. But the key is that you absolutely must drink it at that very first moment you suspect a cold coming on. Don’t delay.

Now, a bit of detail about the ingredients:

Bragg Organic Raw Unfiltered Apple Cider Vinegar. I usually buy mine at Whole Foods, but I’ve seen it at the local Publix too, in the organic bump out section of the oil/vinegar aisle. This ingredient is the most important in the Witches Brew. Don’t just use regular old Heinz vinegar. The Bragg ACV is special because it is raw and unfiltered. It looks cloudy and gross. There are little brown strands of floaty goo in it. Just shake it well and don’t look at it and you’ll be fine. But I suspect that the brown goo is the magic. In fact, Bragg calls that part of it the ‘Mother.’ Look:

Dang, if it is called the ‘Mother,’ you know that sh*t is good. It can probably change a diaper, balance the checkbook, and auger a clogged toilet too.

Apparently, raw apple cider vinegar has been regarded throughout history for its many healing health benefits. Even as far back as 400 BC, Hippocrates, the Father of Medicine, used it for its amazing natural cleansing , healing, and energizing health qualities. I learned about it from my crunchy friend Jennifer. She swears by it. Carries it around like the dad in My Big Fat Greek Wedding with his Windex. Don’t go to her house with a rash or a zit… you’ll walk out of there reeking of ACV.

Cayenne Pepper.  I first became enamored of cayenne pepper when I did The Master Cleanser last fall. That is a story for another day, but let me just say, cayenne pepper is an absolutely amazing health booster. It is good for your circulation, your skin, your mental clarity, and more. Seriously. Just google it, amigo. Or here, let me save you a step.

Honey. Did you know that honey is actually germicidal? It is! Like ACV, the healing properties of honey date back thousands of years. I could go on and on, but just take my word for it, or google it yourself. I have to pay some attention to my 3 year old, Bucket Head, before he sticks a fork in the toaster. Oh, one more thing, if you can get it, local raw honey is much better for you than the mass produced store brands. In fact I think raw is probably better for you with most things, except pork, chicken, and sex, but again… that is a story for another day.

Here’s to your good health!

with love and Purell,