I’ve said it before and I’ll say it again, Twitter ROCKS. In fact, it is my favorite social medium, hands down. And no, it is not just for teenagers and assholes, although there seems to be no shortage of both using it.

I could go on and on about why Twitter is so fabulous, but I think I can best sum it up in a little Tweet exchange I experienced late last week.

It all started innocently enough…

It was Cinco de Mayo, and I was just trying to get a wholesome family dinner of tacos on the table before we had to leave for Mini-Me’s softball game.

My ground turkey was a-brownin’ and my cheese was awaitin’. The oven was preheating to warm up the taco shells and it seemed like all was going right as planned.

Until I opened my box of Old El Paso® taco shells and discovered this: 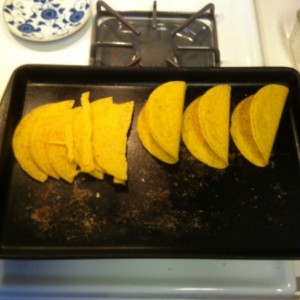 See that?!  THREE out of six hard taco shells were broken to pieces. Now, you know how my (self-diagnosed and untreated) Tourette’s gets when I’m agitated! I just so happened to have my iPhone in my pocket, so I whipped it out and fired off a quick rant to my “tweeps:”

Who do I have to f*ck to get some unbroken taco shells? Damn you again #generalmills! http://instagr.am/p/D5tN9/less than a minute ago via Instagram

It didn’t solve my dinner conundrum, but I felt a little better about getting it off my chest. FYI, the “damn you again #generalmills” is in reference to my previously stated disdain for the General Mills Box Tops for Education Program. Ack, don’t get me started.

Anyheeee, imagine my surprise when I woke up the next day and found THIS in my Twitter stream:

@TheBeardedIris Sorry about the broken taco shells. DM me your address and I’ll replace them.less than a minute ago via TweetDeck


I was SHOCKED. And, um, embarrassed. And a little scared, to be honest. So I Tweeted this:

Holy Taco! @jhagen414 I can’t believe you responded! Now I’m totally embarrassed. I appreciate the new taco shells though. JK about the sex.less than a minute ago via Twitter for iPhone

There was no way in hell I was going to DM (direct message) my address to a total stranger, even as cute as he was in that suit and all. I mean, what if he wasn’t even from General Mills? What if he just wanted to know where to get in line for the free sex? So I cyber stalked him a little using my bad ass e-sleuthing skills and once I discovered he was legit, it was GAME ON.

Would you believe it? He is actually THE Director of Consumer Services at General Mills! Well shut my taco hole!

We moved our relationship to email and he turned out to be really nice! We emailed back and forth several times that day. I offered suggestions regarding their packaging and he seemed genuinely interested in my feedback. Shoot, last time someone paid that much attention to me I was holding a baby in one hand and a pipe bomb in the other. Not really. Well kinda.

Truly though, I was very impressed with Mr. Hagen’s customer service and sincere apologies for my bad taco shell experience. And I too was apologetic for my vulgar Tweet and for losing my temper. Before the end of the day, another upper level manager had contacted me offering more apologies and free replacement coupons. It was awesome.

There was also a very lively and fun discussion on my Facebook profile page between some of my less inhibited friends. I haven’t figured out how to copy and paste it here, so if you want to see it, you’ll have be befriend me. But let me entice you by saying I received this text message from a friend last night:

Dude, I just had to read your whole stream of comments on the taco shells twice… once to myself and then aloud to Ron… so funny we were both laughing out loud!!! As a whole conversation, it was HILARIOUS!

In summary: I frickin’ lurve Twitter. No where else in my life have I ever had customer service issues handled so quickly or satisfactorily. And for the record, I don’t think it was only because I dropped the F-bomb or offered sex in my tweet, although hey, whatever it takes to get noticed, I’m down with it.

My point is simply this: JUST TWEET IT. Come back tomorrow and I’ll give you some of my favorite tips on using Twitter more effectively!

your foul mouthed and ill-tempered friend and taco lover,