I like to think I know a thing or two about what’s funny. And I have to tell you, the movie Bridesmaids is, without a doubt, the funniest movie I have ever seen in my entire life. Really. I’m not exaggerating this time. 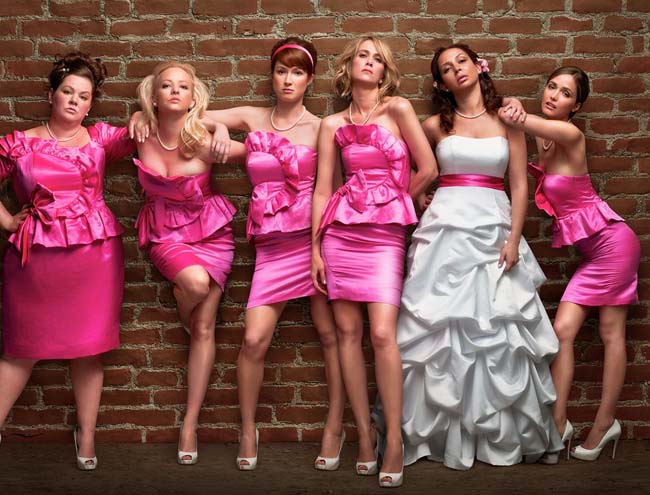 Now granted, I’m partial to physical comedy and bathroom humor, so if that isn’t your bag, well, this movie might not rock your world as hard as it’s rocked mine.

But honest to God, there is one scene, no kidding, that had me laughing so hard I was shrieking like a banshee. And then the shrieking morphed into uncontrollable tears. Weeping, actually, but in a good way. I had to take my glasses off and wipe my eyes and face with my greasy popcorn napkin. I was THAT gone.

And here’s something you need to know about me… I’m a tough crowd. It takes A LOT to make me laugh out loud. And not just because I’m one of those people with a silent but convulsing laugh, which I am. No, it’s also because my tolerance is so high… like a lush who requires an extra big glass to get buzzed.

When my date Tammie and and I were leaving the theater, I was still giggling about the scene where Maya Rudolph’s character is leaving the bridal boutique. I don’t want to spoil it for you, but I was acting it out in front of the theater when two women sitting on a bench nearby said out loud, “Oh, you must be the ladies who were laughing so hard! Wasn’t that movie hilarious?!” And that was AFTER a woman had stopped us in the ladies room to ask what movie we had just seen, because then too, we were giggling our asses off.

And I can’t stop thinking about it. In fact Tammie just called me a few minutes ago to rehash some of our favorite scenes, and she was still cackling like a hyena. She also asked me to research the topic of asshole bleaching because neither of us had ever heard of it. Christ, I’m so glad I’m an old married lady and not dating anymore… the crazy shit the young girls do today! I mean really?! Who cares what color your butthole is? I thought you couldn’t get any more extreme than Brazilian bikini waxes, but apparently you can. Damn. Imma have to ask my husband about this one. Can’t you just hear me, Hon? Will you watch the kids Saturday morning so I can run up to the salon? I made an appointment for a mani/pedi. Oh by the way, while I’m there… should I make my chocolate starfish vanilla?  What. The. Fuck.

Anyhooo, I told Tammie I want to watch Bridesmaids about 20 more times and study it to learn how to write a successful {romantic} comedy screenplay. I really think there could be a college level film class based on this movie and why it works. But I’m looking forward to speaking with some of my film buff and movie making friends to see if they agree.

It wasn’t just the writing though, which I just read Kristen Wiig and Annie Mumolo completed in six days. The casting was absolutely magical. The way the women play off each other is a sight to behold. I have to say my favorite was probably Wendi McLendon-Covey, who plays Rita, the exasperated mother (go figure.) And it’s not just the ladies… the guy who plays the romantic lead, Chris O’Dowd, is flat-out adorable. And Jon Hamm as the booty-calling dickwad? Perfect.

I was shocked to learn that the “explosive” bridal boutique scene wasn’t part of the original screenplay but rather was something Judd Apatow convinced them to add during the filming. He’s the wickedly funny producer of Superbad (one of my favorites!), Knocked Up, and The 40 Year Old Virgin. I was kind of hoping that Kristen Wiig had written this scene because I think it’s about time we ladies claimed a share of the bathroom humor action. We’ve seen it a million times before from the menfolk: Dumb and Dumber, Along Came Polly, Austin Powers, etc. But kudos to Apatow for recognizing that it’s EVEN FUNNIER coming from women. And major props to the cast for absolutely nailing this scene. Unexpected and brilliant. Truly.

My only issue is that after watching this movie, I am afraid for the future of comedy. The bar has been set so high now – I can’t imagine it getting any better. And also, now that the barrier of anal bleaching has been breached, what else is there? Shoot, remember when Charlie Chaplan was funny? And then Jack Lemmon? And then Mel Brooks movies? After Bridesmaids, what else is there? And based on this trend, how much more will it take to make our kids laugh when they’re our age? {Sigh.} Take my word for it, movies are just going to get grosser and grosser from here on out. And personally, I say bring it!