Just in case you happened to see me driving through my neighborhood yesterday, I feel like you should really give me the benefit of the doubt.

And if you got a good look at me, you may have noticed the pit stains on my t-shirt and the mascara streaks on my face.

And yes, indeed, there was a rather large black Lab running alongside the driver’s side of my silver minivan. 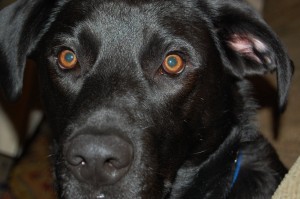 And no, your eyes weren’t playing tricks on you. The dog was on a short blue leash, and I actually was holding the leash with my left arm dangling from the open driver’s side window.

And yes, the dog appeared to be very tired and was a little foamy at the mouth.

Yes, that was DaveFM’s Radio Free Lunch blaring from my speakers. Perhaps you got a glimpse of me grooving to Short Skirt Long Jacket by Cake.

And sure enough, my hazard lights were blinking, as I was driving ridiculously slow.

If you saw us, you probably thought to yourself “That is one lazy (and/or crazy) bitch!”

But what you don’t know is that I had just spent the last two hours hanging with my dear friend Christel and her newborn baby who live on the other side of my neighborhood. And that Christel had been loving me through a mini-breakdown about a lifetime worth of emotional baggage that is always bubbling right below a very thin surface.

You probably also don’t know that Christel invited my mildly psychotic dog Ike over to play with her enormous black German Shepherd while we were visiting. 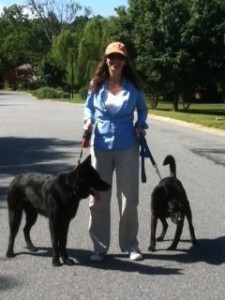 Or that Ike decided to bolt at the end of our playdate before I got a chance to get him back on his leash.

Maybe you don’t know that Ike has a long history of playing “you can’t catch me!” which is why we ended up installing a Hidden Fence three years ago.

Or that I had exactly fifteen minutes to get back to my car and get across town to pick up my two older kids from their last day of Tech Camp.

Perhaps you didn’t realize that I had just run from Christel’s house to mine with a four year old boy riding piggy-back and shouting “Giddy up, Mommy!”

Maybe you don’t know that when Ike used to run away (before we got the fence) the only way to get him back was to drive around, call him to our open minivan, and trick him that he was “going bye-byes!”

Or that the day before I had spent two hours and $150 having my disgusting 6 year old minivan detailed for the first time EVER and that the carpets were still damp.

Or that Ike’s paws and nails were caked with mud from the romping, and chasing, and digging he had just done in Christel’s backyard.

And that I couldn’t possibly just wait for Ike to find his way home on his own due to “the incident” we recently endured when Ike was assaulted in our yard by an unbalanced courier. (And found to be not guilty, by the way, in a court of law.)

So before you pass judgement on me for being the neighborhood crazy lady who drives alongside her dog for his exercise instead of walking him, you should really give me the benefit of the doubt.

Things aren’t always what they seem.

Besides, there are many worse reasons to think of me as the neighborhood crazy lady.