Ask and ye shall receive.

“Ask and ye shall receive.”

I don’t know who said that, but hot damn if it ain’t the God’s honest truth.

(Kidding, I know who said that. It was Kevin Costner in Field of Dreams, right?)

Earlier this week I was in a major funk about the state of my house and the fact that I had not finished any of my 52 Weeks of Organizing projects lately. I suspected that if I could just focus and complete something, it would help me tremendously. So I declared my intentions to the universe.

And lo and behold, help arrived.

My organizing guru, Laura, THE Org Junkie, heard my plea and responded with the just in time medicine I needed: a fabulous post titled Finish what you start. It is filled with such good advice that I don’t even mind her blaming ME for her being a little hard on all of us this week! (Sorry guys. It’s for our own good.)

Laura encouraged us to update and reprioritize our lists! Holy cheese! That is just the lightbulb I needed. My priorities HAVE shifted dramatically since I began this journey 24 weeks ago. Almost losing 14,000 digital photos can do that to a gal.

But I never would have thought to update my list! What a great idea! 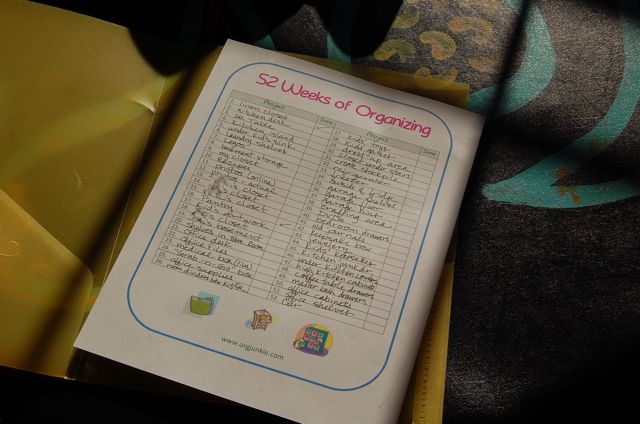 When I look back at my original list, it really doesn’t make a whole lot of sense to me anymore. I think it needs a major overhaul. So that’s something I’ll be working on next week.

This week, however, as promised, I focused on my office desk, the office floor, and my new computer. And I actually accomplished something! Staying focused in one room made a huge difference. (The rest of my house looks like shit, but I don’t care…I’m on a mission, ya’ll!)

But before I can show you my progress, first I have to show you something shocking! 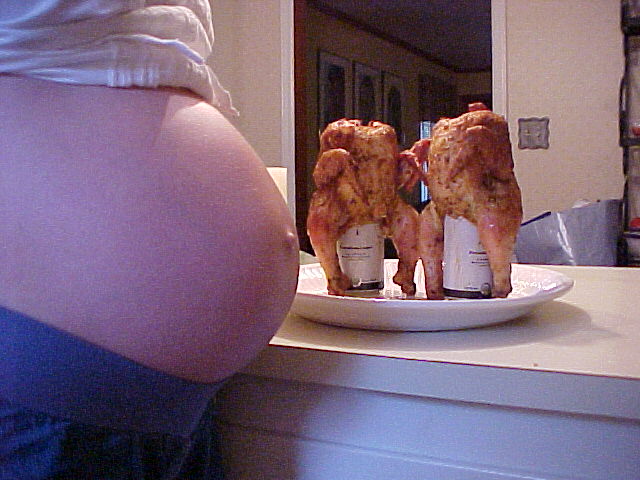 Ooops, not that one.

In the process of organizing some of my photos, I came across this old picture of my home office/den in 2004: 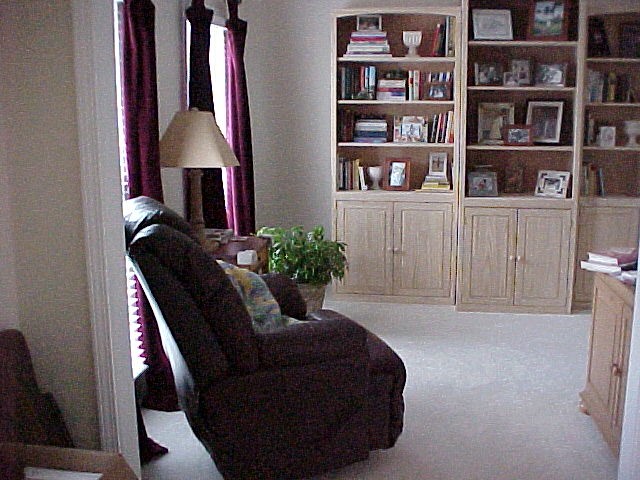 Pretty tidy, wouldn’t you say? This picture was taken about a year after we moved to this house. That was before we had a dog, or a third child. 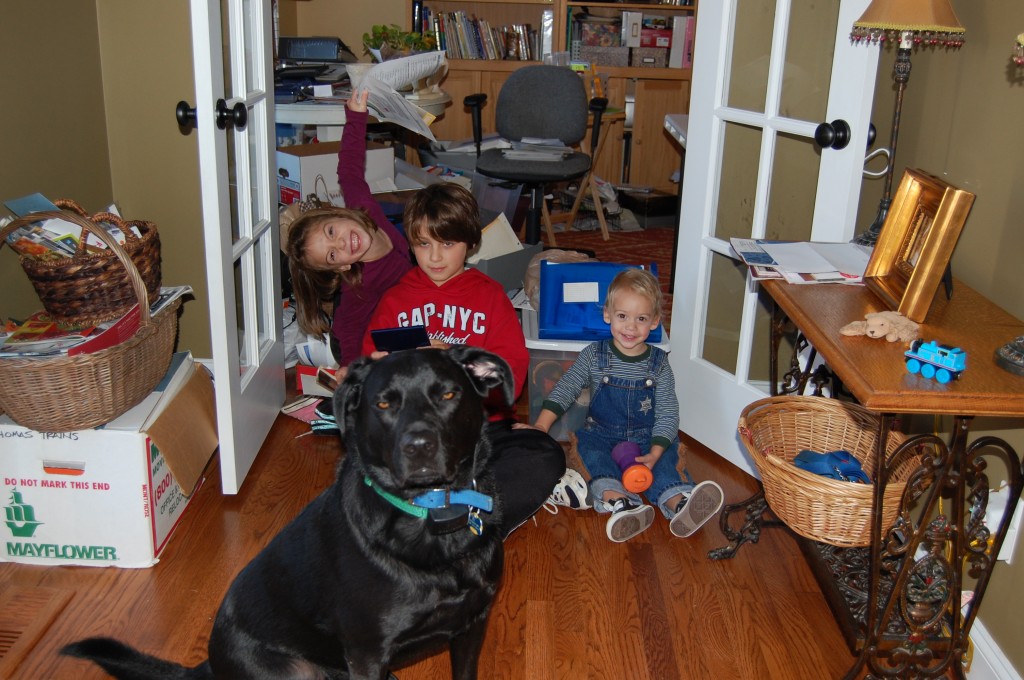 Look at the dog's face! Even he can't stand it here. And do you see what Mini-Me is doing in the background? Tossing my paperwork into the air. Nice.

That was Autumn, 2008. We had recently added hardwood floors and French doors. We painted the hallway and the home office. Like you can even tell with all that clutter in the way. Let’s face it, no amount of buttercream frosting can hide the fact that the cake underneath is made of crap.

You would think that finding $1463 worth of free money in that room would have motivated me to keep it more organized.

It was January 2009, not long after that picture above with the three kids and the dog was taken.

You know how January goes… new year, new resolutions. I was bound and determined to get our home office under control. So I started moving piles around and putting like with like. That’s when I found a stack of unopened envelopes from my health insurance company. Thinking they were just monthly statements, I had never opened them. Smooth move, Ex-Lax.

So one night I sat in front of the TV and started going through that stack one envelope at a time. Sure enough, they weren’t statements. They were reimbursement checks! And they were 9 months old and about to expire. If I had not found them when I did, all that money would have been lost.

That, by the way, was what got me on the Oprah show in March of that year. Well my voice anyway, and a bunch of pictures of me, my family, and my messy messy house. Ahhhh, good times.

But here we are two years later, and I haven’t really made a ton of progress on that home office since then. Here’s a picture I took about a week ago: 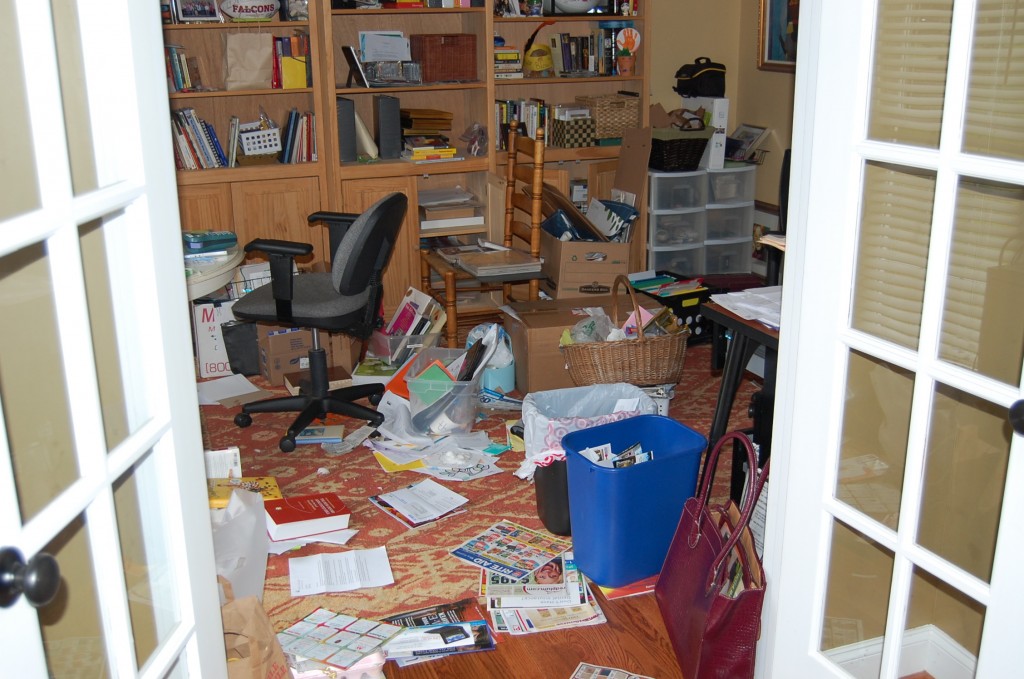 Lord have mercy! Every time I come home to this I think I’ve been burglarized. Only I haven’t. The thief is ME and I’m robbing myself and my family of a better life. That’s crazy.

But I’m proud to say that I am a woman of my word and I cleared that messy floor this week: 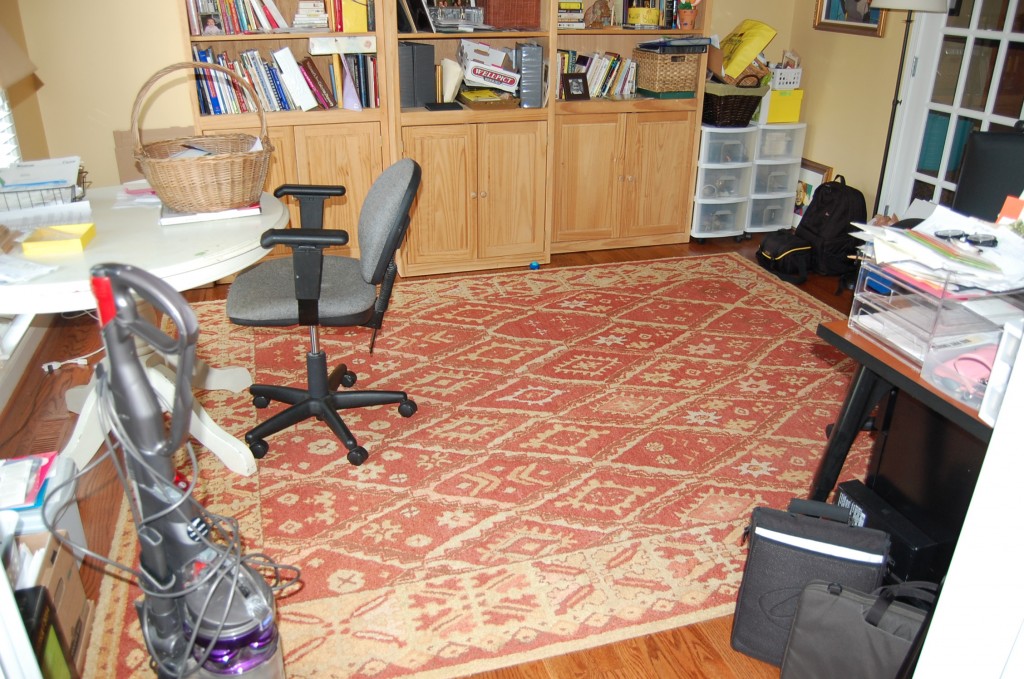 Keep your eyes on the floor... ignore the bookshelves.

I followed Laura’s advice and put a big basket by the door to gather all the items that didn’t belong in my office. Still haven’t put that stuff where it really belongs, but baby steps, right? We’re going for progress, not perfection.

Now I’ve got stacks of organized, manageable piles around the perimeter of the room that I plan to tackle one by one over the next few weeks: medical papers, warranties, kids’ artwork, things to frame, the recipe pile, etc. I’ve also got to organize that bookshelf so it doesn’t look so messy. I always wanted to paint it or stain it too, but for now, I’ll settle for tidy.

I’m feeling much less overwhelmed! I CAN do this. One little pile at a time.

Special thanks again to Laura the Org Junkie for all her support and expertise! I’ve definitely made more progress in the past week than I’ve made in the past two years! Thank you, Laura!

Can’t wait to show you all my progress next week. I’m going to stick with this room until it is complete! Come back next week and see!