You CAN go home again, if your hometown ROCKS.

I was born and raised in Pittsburgh, Pennsylvania. Even went to college there at Carnegie Mellon University. History major, with an undeclared minor in beer drinking, table dancing, and Greek mating habits. Or so it would seem.

But in my early twenties I hightailed it out of The Steel City in search of more. Drove ‘cross country all by myself in a beat up old Suzuki Samurai with nothing but a CB radio by my side and a .38 caliber pistol in my fanny pack. That was 1994, and the fanny pack was probably the most normal part of that scenario. (Shaking my head in disbelief.)

I ended up in the Bay Area of California. That’s where Highway 80 ended or I probably would have kept on going. My good friend Buster let me crash on his living room floor in Rockridge for a few weeks. (Um, more like 8. Great guy. Changed my life.)

That’s where I met The Gatekeeper. 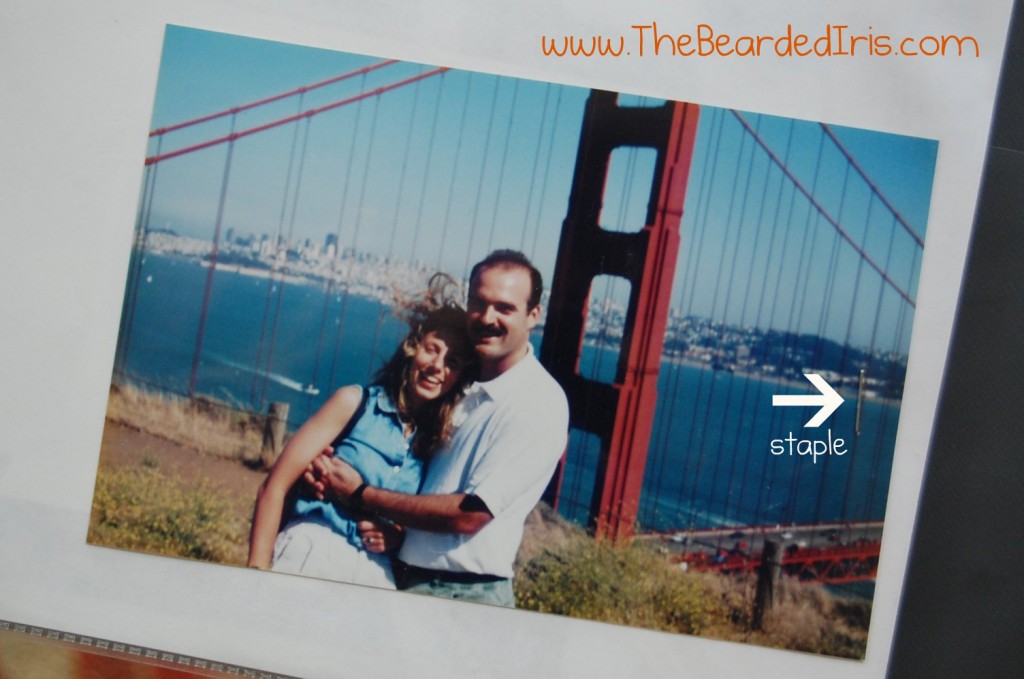 Yeah, it's from my Mom's scrapbook. How'd ya know? Nice hand placement, dude.

Good thing, too… because I sure do love that man. And we make really purdy babies.

But let me tell you something. Leaving Pittsburgh may have been the dumbest thing I’ve ever done.

I frickin’ love that city.

Sometimes you don’t realize how much you love something until you see it with fresh eyes.

Last weekend I took my eight year old daughter Mini-Me to Pittsburgh for our first ever Girl’s Weekend.

Of course, my Mom is the first one to remind me that I enjoyed my family so much this trip precisely BECAUSE I don’t see them very often. I suspect she’s got a point there.

Crazy family aside, oh how it pains me to no longer have regular access to these: 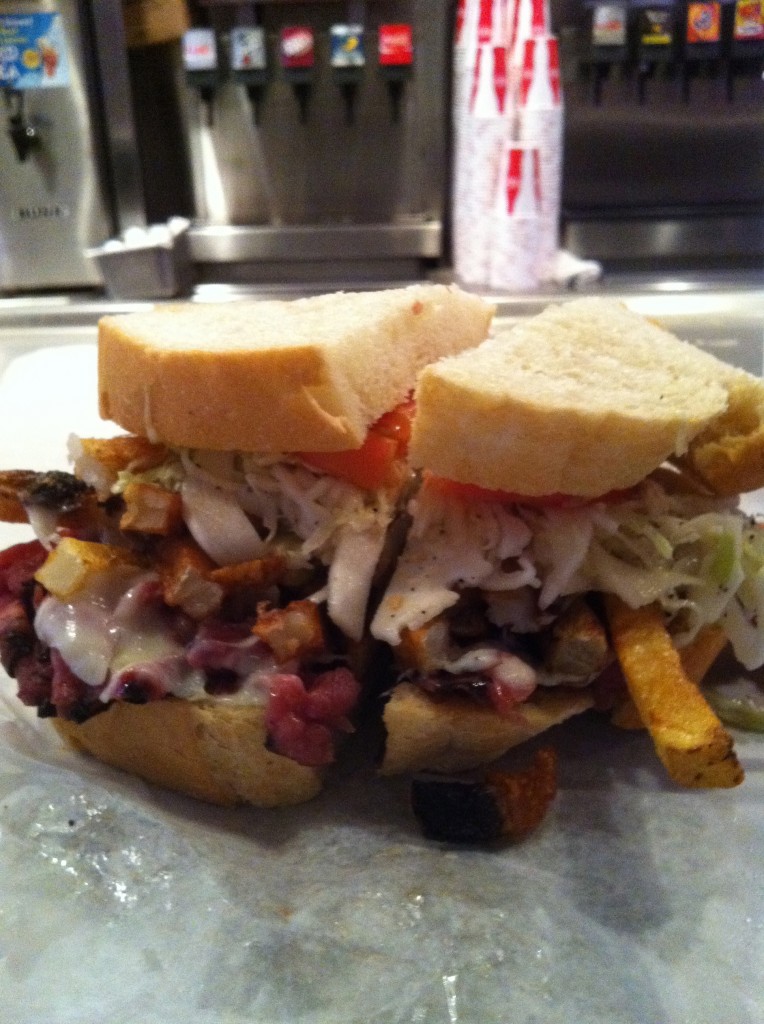 Yes. Look at THAT! All hail Primanti Bros., I say. Where else can you get pastrami, cheese, tomato, cole slaw, and FRIES, in between two thick slices of fresh local Italian bread? The first time you eat this, you will think you have died and gone to heaven. It’s especially good with an Iron City Beer. But don’t just take my word for it. This “sammich” has been in National Geographic Magazine, on Man v. Food, and the History Channel’s “Best Sandwiches in America” show, among others. It’s THAT famous and THAT good.

There are a vajillion other reasons I love and miss Pittsburgh, but for the sake of brevity, let me pick just two more to share (for now).

This is Dreaming Ant. Located in Bloomfield, it is Pittsburgh’s last remaining DVD rental store. 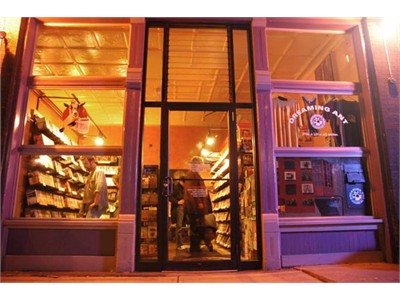 Nestled in the back of the Crazy Mocha Coffee shop on Liberty Avenue and Taylor Street, Dreaming Ant specializes in independent films and documentaries, and prides itself on being all about “film-geek satisfaction.” I guess I’m a bit of a film-geek, because there really is something so completely satisfying about browsing and choosing DVDs in person in an artsy environment and with the astute recommendations of other like minded film-geeks. It’s a personal experience most of us don’t get anymore in today’s digital, faceless, queue-and-stream world.

So go get a cup of coffee and browse the myriad eclectic titles. It won’t take long for you to realize that the regular patrons of this place are as special as the movies you can find there. Victor, you are one crazy mo-frankie. It was an honor to meet you and to witness first hand that the word “jag off” is alive and well in Pittsburgh. For those of you who do not speak Pittsburghese, jag off means “asshole.” Don’t be a jag off; become a member at Dreaming Ant and tell ’em Iris sentcha.

Which brings me to another thing I love and miss about the Burgh: the accent/dialect. If you don’t know what I’m talking about, you might need to hear it for yourself:

Holy moly, that’s good stuff. I know, because I can speak it fluently, n’at, and I ain’t no jag off. 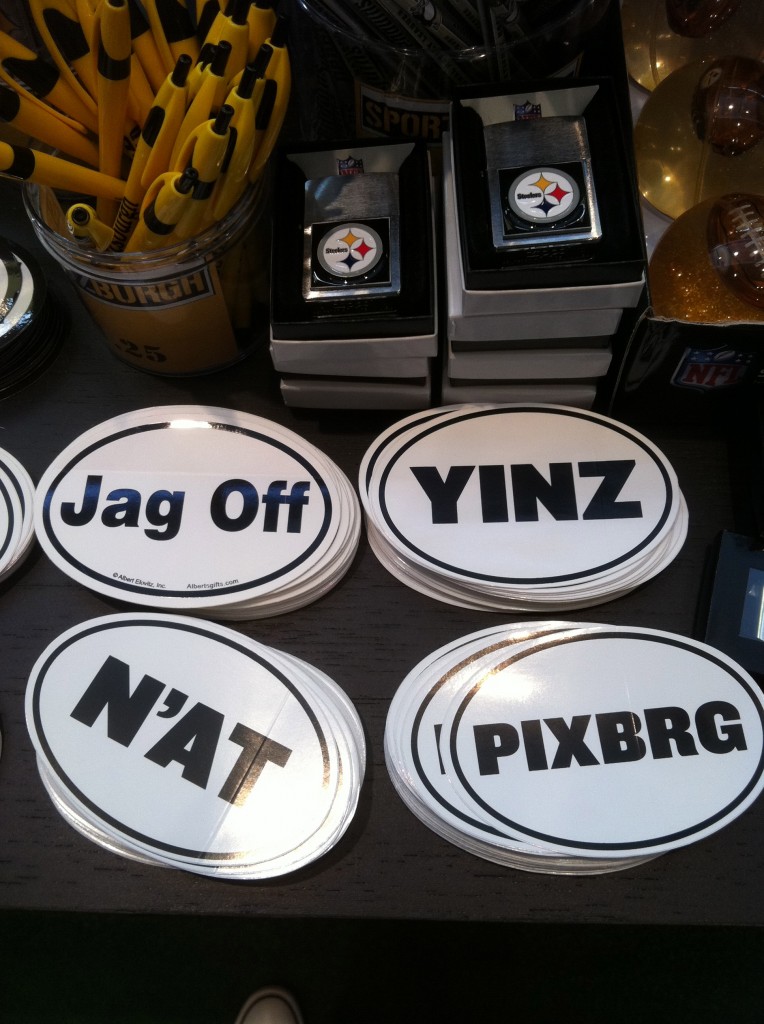 Earlier this week at the Pittsburgh International Airport everywhere I looked was merchandise celebrating the sounds of the Burgh. Hells yeah, it’s ABAHT time, n’at. Fuck all yinz bitches who put me DAHN in high school because you couldn’t tell if I was sayin’ TOWEL or TILE. Being a Pittsburgher is something to be PRAHD of. And not just because Hines Ward won the Mirror Ball Trophy on Dancing with the Stars, n’at. 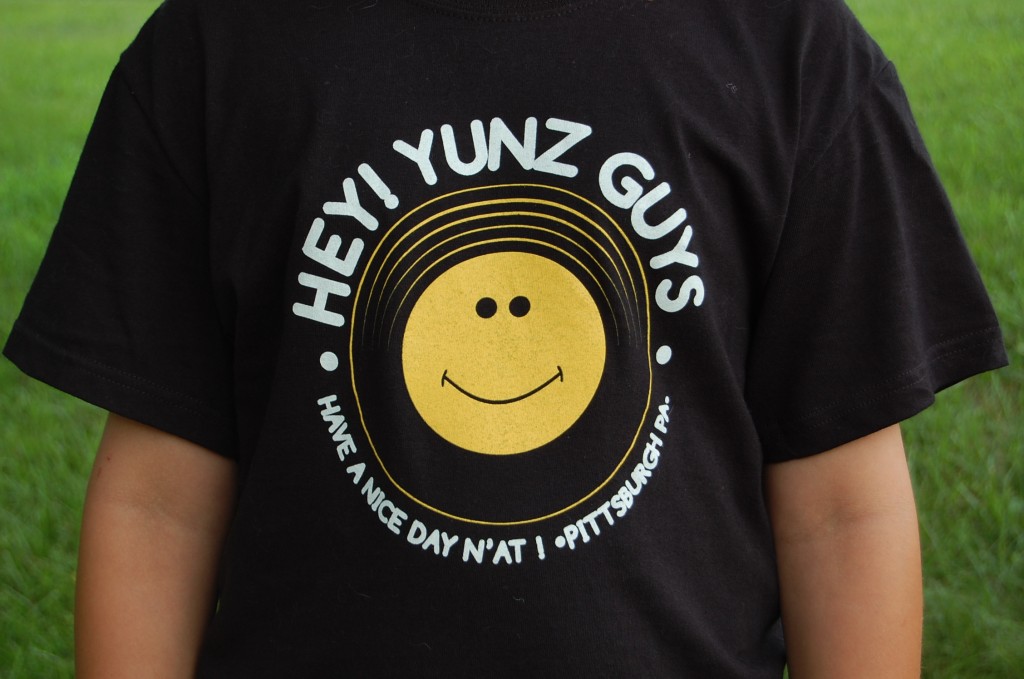 Get it? Got it? Good. In summary, Pittsburgh rocks. Go there. Meet good people, eat good food, watch good movies. And never carry a gun in a fanny pack. That’s just stupid.