“If you love something, set it free. If it comes back to you, it’s yours forever. If it doesn’t, it never was.” ~Chinese Proverb 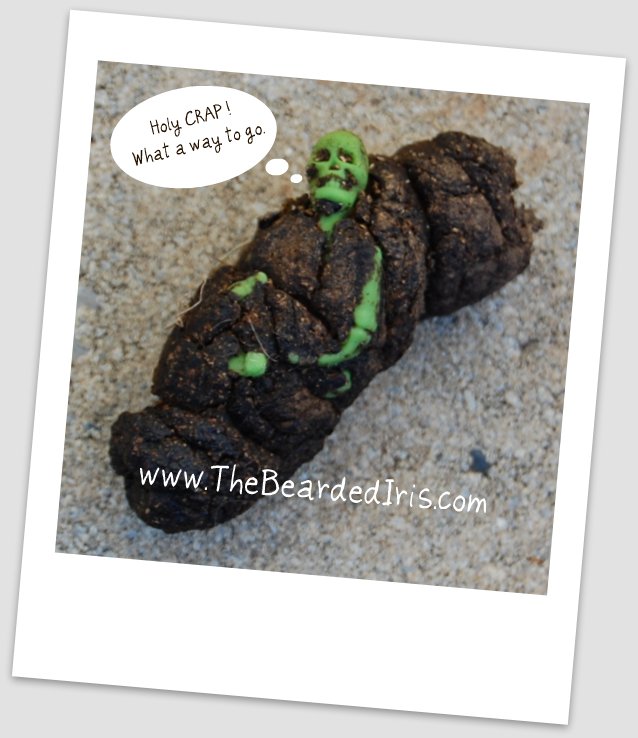 He was Bucket Head’s favorite trick-or-treating loot last year, until he lost him in the yard and Ike, our insatiable dog, gobbled him up like a rubbery green Snausage.

We sure were sad about losing that cheap little stretchy green skeleton. And when I say “we,” of course I mean “he”…because frankly, I couldn’t give a shit.

Unlike my dog, who did give a shit… a very entertaining shit, in fact. And finding that favorite little toy encased in that foul crypt a few weeks later was just the closure “we” needed to move on and find a new favorite toy. Goodbye stretchy green friend.

Lookie what Nature Boy found in our garden the other day: 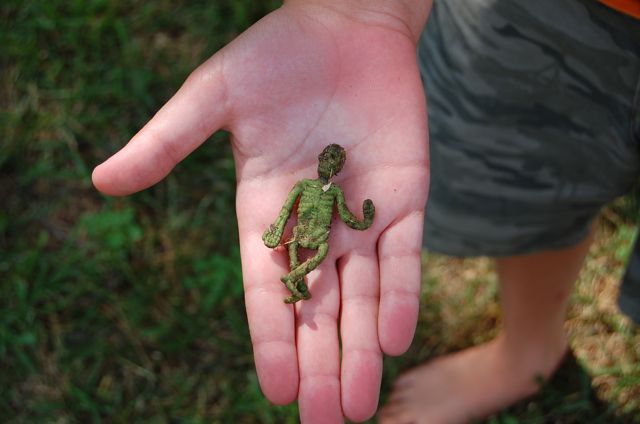 Like I care. Shoot, that formerly-poop-entombed toy is one of the least disgusting things that kid touched all day. He’s in middle school now, don’t you know.

I guess that means this cheap little toy is ours forever, according to ancient wisdom.

Now, some might take this as an affront, a cruel twist of fate. As in: “THIS is what I get back? Really? Not the tennis bracelet I lost on a walking tour of Asheville in 2002? Or the dreamy future Hollywood movie and television star I briefly befriended in high school?”

One of the few things I have control over in my life, theoretically, is the way I respond to life’s little curveballs. So instead, I choose gratitude and joy.

I think it is very auspicious that this little green toy keeps coming back to me. I’m certain it is a sign of resiliency. It reminds me that no matter how crappy things sometimes get, if you wait long enough, it will get better. Now of course I’m talking about “the small stuff” we all sweat, not that suspicious lump growing on your neck, Aunt Betty. Get that checked out, for Pete’s sake.

The other reason I take delight in the reappearance of this little toy is that I’m pretty sure it firmly cements my position in the blogosphere as the Princess of Poop. The Queen of Crap. The Duchess of Doo-Doo. So be it.

Hey, we all need a niche. I’m just trying to go with the flow.

So I’m going to wash the daylights out of this resilient little green skeleton and then put him in my “Shit My Kids (and Dog) Ruined” box. Maybe someday I’ll take all those little partially eaten and melted and broken tchotchkes and turn them into ornaments for a funny little “Holy CRAP, Parenting/Dog Owning is HARD” themed Christmas tree. Maybe I’ll do that when Mini-Me is in high school, as a supplemental form of birth control. Yes. I like that idea. I like it a lot.

My toilet bowl is half full,