PetSmart and Bret Michaels team up to skankify your pets.

Just when I thought I had seen everything, I walk into PetSmart this week and see this: 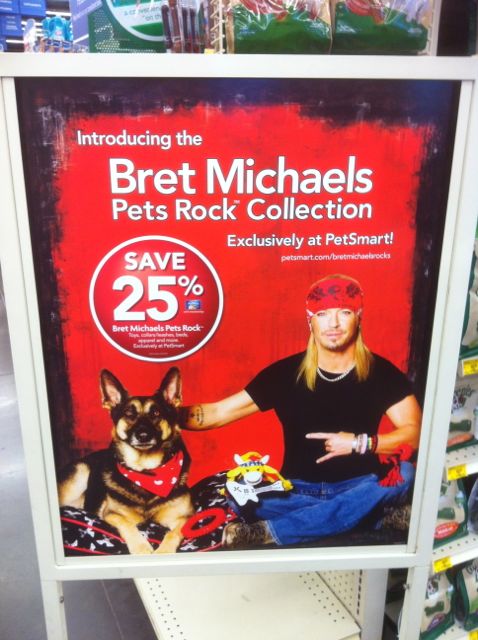 Is there anything this man CAN’T do?

I mean, a musician, spokesperson for the American Diabetes Association, animal lover, AND a businessman? I thought reviving his career with the Rock of Love reality show was pretty damn genius. But the Rock of Love (Tour) Bus edition? Brilliant. And THEN…to compete for and actually WIN Donald Trump’s Celebrity Apprentice (one month after suffering from a brain hemorrhage and a stroke!) Come on. Bret Michaels must be hiding the best brain ever under that signature bandana.

Bret proved his business chops by winning Apprentice, clearly. And PetSmart is just the partner to get on that Love Bus and ride it into the sunset of ProfitTown, USA…now 25% off, while supplies last.

Because there is obviously a market for dressing your lapdog like a skank. 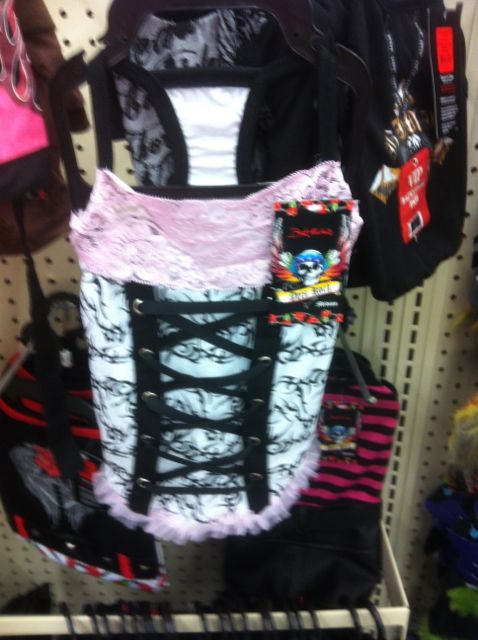 Or how about the black rocker tank with jeans combo? Crotchless of course: 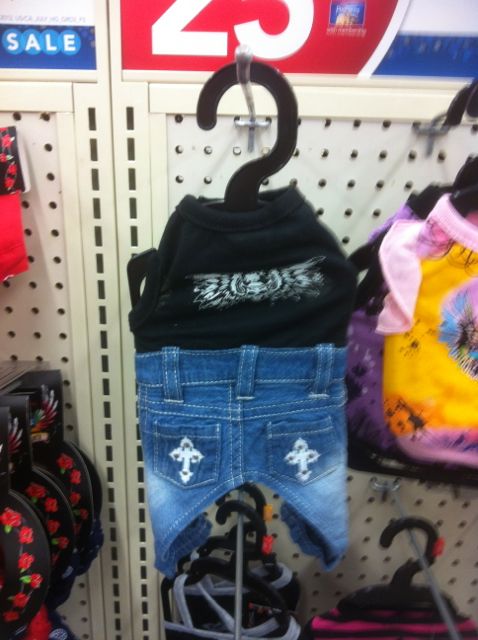 Well, isn’t that special (said in my best Church Lady impersonation)…two matching embroidered white crosses on the back pockets, flanking her little doggie backdoor! Because nothing reminds me of the suffering my Lord and Savior endured on Golgotha like a pair of distressed ass-less chaps on my faithful canine companion. (That concludes the Church Lady inspired portion of our broadcast.)

But I think my favorite outfit is this one: 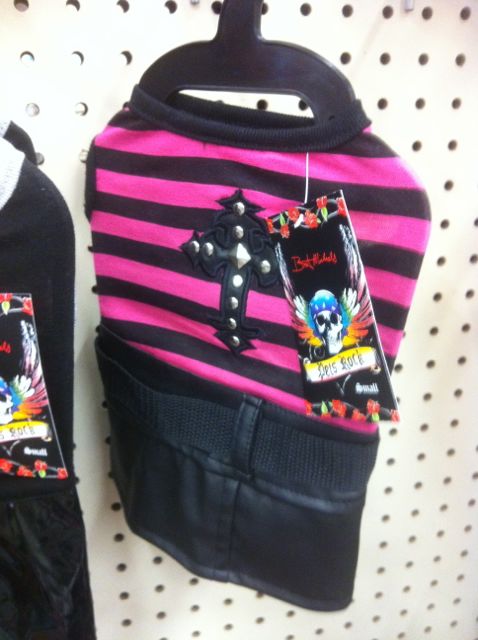 Oh yeah baby…nothing says COME like a black leather mini-skirt on your fur-baby. Bitches who dress like that can’t keep their paws off the Beggin’ Strip, if you know what I mean.

Maybe you’re thinking, I’m not into dressing my dog like a groupie. Don’t worry, Bret’s got you covered. His Pets Rock line also includes a variety of rock inspired toys, bowls, collars, leashes, and accessories. 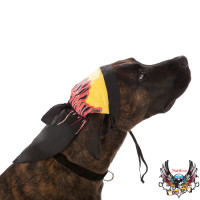 Because all the cool dogs are wearing doo-rags, don’t you know. Keeps their hair out of their eyes while they ride their motorcycles. Also good for dogs with cornrows.

Hey, it takes all kinds. Dress your dog however you want. I’m just excited that our country’s economy is obviously on the upswing. Someday, when anthropologists look back on this period, I want them to see that the economy wasn’t as bleak as everyone said. I want them to note that there was a segment of the population who placed great emphasis on maintaining the rocker image of their four-legged friends.

And also, I want anthropologists to record the awesome power that rockers like Bret Michaels had over people far and wide. 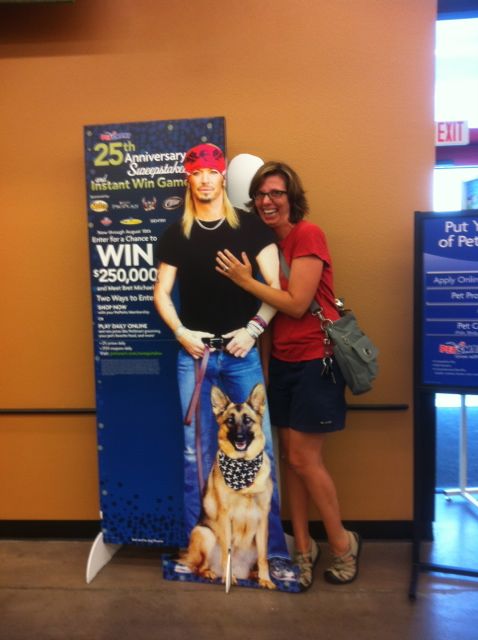 …who was clearly swept away by the sheer magnitude of Bret Michaels’ sex appeal.

What can I say? I’m just grateful I was wearing shorts and not a skirt or I might have whipped off my Hanes Her Way hipsters and flung them at his bandana wrapped head.

Even kids can’t resist the force that is Bret Michaels: 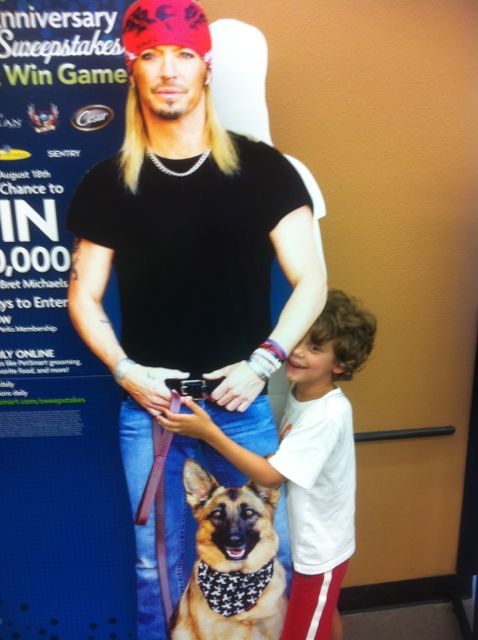 Unless he was, and then I’ve got bigger problems.

Oh my God. Is my son a groupie?

Alright, people. Move along. There’s nothing to see here.

Now if you’ll excuse me, I’ve got to figure out how to attach this new doo-rag to my dog. It’s a much better look for him than the Hanna Andersson pa-jay-jays Grandma sent everyone the Christmas of 2008. 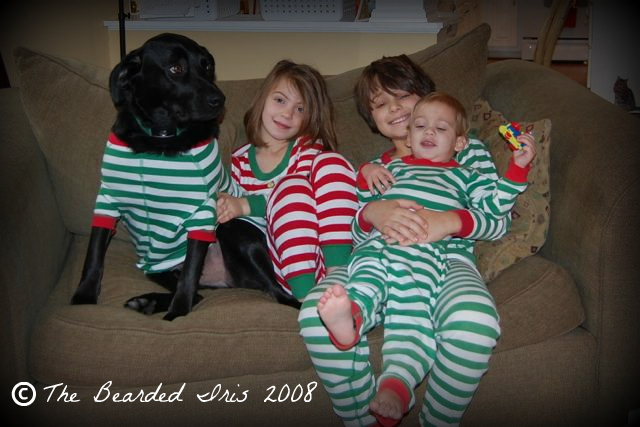