The Bearded Week in Review

So, according to the news, “Hurricane Leslie was downgraded to a tropical storm as it was almost stationary in the Atlantic before moving north on a track past Bermuda.”

That about sums it up, right there.

Not that I’m complaining. Tropical storms are still powerful forces of nature. I guess I’d rather be a tropical storm than, say, a cold front or a high pressure system. Those are so boring!

And at least I’m not a Haboob.

Can you imagine the ribbing I’d be getting from my mother about my hoarding tendencies if Hurricane Leslie ended up being the next Katrina? (ptoi ptoi ptoi)

Frankly, it should come as no surprise to anyone who knows me that my hurricane namesake would peter out and go off course. That’s pretty much my modus operandi. 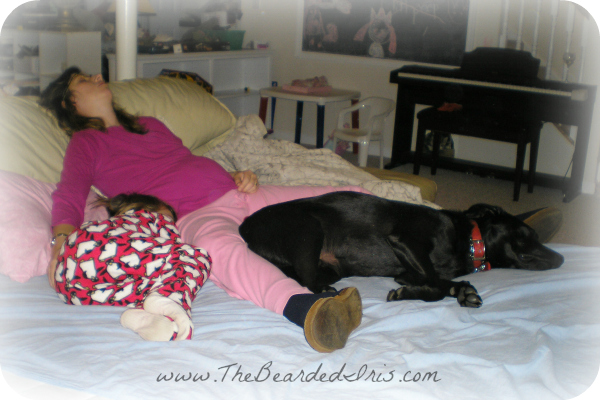 Last week was small but mighty due to the holiday. So if you’re just joining us, I’ll try to make it easy and painless for you to get caught up.

I was In The Powder Room on Labor Day sharing the story of the grossest biohazard I ever had to clean up and why I have such a heartfelt appreciation for school custodians, teachers, and nurses.

Honestly, those people are Saints. Go hug one. Now.

Then on Tuesday, I kicked off a month-long series of blogging tips with a surprisingly well-supported post about the importance of properly spacing desktop published sentences.

So glad to know I’m not the only one out there with such a passion for punctuation!

I suppose I have all my elementary teachers to thank for that.

Lord knows I loves me some teachers.

She’s quite lovely. Don’t get me wrong. She just wasn’t a good fit for Mini-Me’s particular learning style. That was a tough year for my baby.

But I actually have a great deal of respect for the profession of teaching in general, and I do believe I’ve mentioned it here once or twice. (And then again.)

In fact, you might not know this about me, but once upon a time I actually wanted to BE an elementary teacher.

Now boys and girls, Mrs. Marinelli made you a special treat for snack today! They are cookies that look like little vulvas! Isn’t that hilarious?!

After college I took out a big-ass loan, went back to school for two more years, got my post-baccalaureate elementary teaching credential in Pennsylvania, and then I discovered:

But due to the fact that I tried to be a teacher and really sucked at it, I have a burning admiration for people who love and do that job well.

Just thought I’d throw that out there in case you didn’t know that about me. Because if you just so happened upon my Facebook page status last Thursday, and you didn’t know what an honorable, decent, generally enthusiastic supporter of teachers I am, you may have gotten the wrong idea. 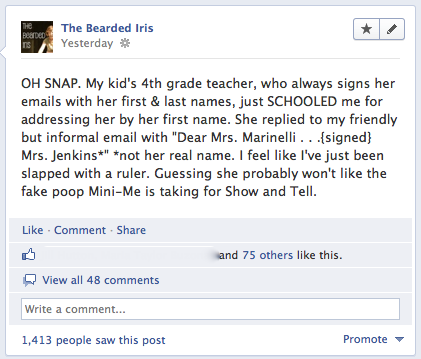 That post elicited a wide variety of comments ranging from hilarious to incredibly offensive. It was a real roller coaster. Who knew?

Excuse me for saying, but there are some lonely, mean, judgmental people on the Facebook and I’m going to give them a piece of my irritated PMSy mind tomorrow In The Powder Room. Stayed tuned for that hot mess. Damn.

But when I’m not opening up a can of Whoop-Ass on Facebitches, I like to unplug and relax (often with an 80 pound Black Lab all up in my vagizness.) Babble published a list last Friday of how some bloggers (including me) like to unplug. Check it out here.

Okey dokey. Don’t forget about the Craft Whores contest that begins next Thursday! We announced the judges last week and will announce the prizes and judging criteria this coming Wednesday. Well what are you waiting for?! Get your naughty craft on!

And as if I haven’t given you enough to see and do, here are three other things that rocked my world this week:

1.) This laugh-out-loud mockery of the new Bic Pen for Her by the ever-hilarious Mouthy Housewives. I’ve read a bunch of Bic parodies this week and this is by far my favorite.

2.) This chart comparing the first day of school to childbirth by Kim of Let Me Start by Saying. That girl is on a roll with the funny graphics lately!

3.) This Back-to-School guest post at In The Powder Room by Robin O’Bryant. No wonder she’s a published author with a weekly newspaper column. That girl’s got mad skillz! (You can find more of her work at her delightful blog: Robin’s Chicks.)

Happy reading and enjoy the rest of your weekend!