While absentmindedly scrolling through my Twitter feed yesterday, I stumbled across this blog post title: Pet Hates. Not to be Confused with “Hates Pets.”

Which just goes to show you how important blog titles are. Because I thought to myself, that’s funny… I hate my pet sometimes. Like when Ike does this, this, this, or this.

But anyway, I clicked that compelling Twitter link, and read a very funny post about 5 things the author hates (none of which were pets). And it was awesome. I even left a comment… which (as you know, dear lurking reader) isn’t something one always (or in your case, ever) does. And then I clicked on another link in her post and found out that there is a whole society of list making bloggers!

Well sign me up for a hot, steaming side dish of THAT!

Brace yourselves, I’ve been brewing this list in my head for a long long time. In fact, boiling it down to just five is going to be harder than bringing Charlie Sheen home to meet your dad. (“But Dad… he calls me a Goddess!”)

So here it is, my first listography, Pet Hates:

1. Christmas Card Newsletters
I get it… your life is SO MUCH better than mine. As if I didn’t already know that when your card arrived on November 29th with an embossed return address and a Virgin Mary stamp. Bragger.

2. People who chew gum in church
I see you chewing your gum, mister. Now, what are you gonna do? Stick the gum under the pew before communion? Or swallow it? Or just tuck it over to the side of your yap hole while you consume the Blessed Sacrament? None of these are acceptable answers. Spit the gum out before church, asshole.

3. Baby showers
Yes, babies are cute. And yes, moms-to-be need stuff. But having to watch someone open hundreds of cloyingly pastel gifts while all the hens in the room cluck “awwwwWWWWWWW!!!!!” (gradually increasing in pitch, volume, and enthusiasm) over the 18th embroidered and appliquéd onesie, is just plain torture. At least the last one I went to had really tasty sangria to numb the pain and no humiliating games like “Guess the Girth of the Pregger.”

4. People who talk on their cell phones in public
Dude. You are in the waiting room of the Toyota service department with twelve other customers. We do not want to hear about your gout or the fact that you “wish a pox on the family” of the client who screwed you. Jesus H. Christ. Or how about the lady behind you at the grocery store who is talking on her Bluetooth, but you don’t see the headset and you think she is talking to you? I hate that bitch.

5. Vagisil commercials
In general, all feminine hygiene ads just irk the hell out of me. But specifically, the newest Vagisil commercial where the sad and dejected looking woman in the public restroom is saying “I found out the hard way that not all cleansers eliminate vaginal odor,” while two women in the background are clearly gossiping about Ms. Stinky Pants. Really? You found out “the hard way?” Oh my God. Lady, you have much bigger problems than choosing a body wash. If it smells THAT bad, you might want to see your doctor a-sap. I’d also suggest some new friends and/or hobbies that don’t include waft-friendly positions like Downward Facing Dog.

Wow – that felt great! Listography, you are my new BFF. Just don’t invite me to your baby shower.

The ONE kitchen gadget I can’t live without.

How does a busy mom-on-the-go feed the kids, discipline the pets, and manage the household all at once? Easy. All you need is a handy dandy large glass bowl like this:

What? You don’t see how a simple glass mixing bowl could possibly do all that? Well let me paint a picture for you, friends.

It’s 8:00 AM, and Bucket Head sits down to eat his freshly toasted store-brand waffle. At approximately 8:01, Bucket Head senses the call of the wild and runs to the loo, leaving his vulnerable waffle alone and afraid.

Ike the Terrible is lurking on the outskirts of the kitchen… patiently watching and waiting for this very moment.

Halfway there, and realizing the potential for loss, Bucket Head shouts: “Mom – protect my food! I gotta go potty.”

That’s my cue. I am the official protector of the food. But I’m also terribly busy checking my email. I can’t just idly sit there and keep the dog off the food while Bucket Head is dropping the Browns at the Super Bowl.

But with a quick flick of the wrist, I can turn this regular glass bowl into something we like to call The Dome of Doggie Dispair.

And voilá! The waffle is momentarily safe and warm, and I am free to go about my business while Bucket Head takes his time on the Sir Thomas Crapper.

Added bonus, The Dome is equally effective for dogs and cats.

Good thing too, because look who just pulled up a chair to the breakfast buffet. Check out that sweet little gray beard. She looks just like her Mama.

As always… lazy, but somewhat clever,

So I go to take Bucket Head to preschool this morning and as I’m getting into the car, I notice that something is wrong.

Hmmmm. I don’t remember leaving all these plastic baggies in the front seat, I thought to myself. Upon closer inspection, I realized “the baggies” were actually just one baggie that had been shredded into numerous pieces. Near the plastic baggie shreds were also several fruit snack wrappers and granola bar wrappers, also torn to bits.

But the big give away was the torn tissues and napkins. I knew as soon as I saw the white fluffy confetti on the floor of the passenger seat that Ike had made his way into the car sometime in the last 12 hours.

What the…? How in the world did he get in there?

Then I remembered getting home from my in-laws’ Super Bowl party and carrying one of the sleeping kids into the house, leaving the van door wide open… which to Ike, is simply an invitation to an all-you-can-eat-buffet, doggie style.

I’m a mom. I drive a mini-van. I transport three children to and from a variety of activities every day. Thus, my van always has a cornucopia of crumbs and snack-stashes and dirty napkins strewn throughout it. For a dog like Ike, it is The Promised Land.

Usually, I don’t mind if he takes a quick tour of the van and sucks up the stray crumbs. But the shredding of the baggie, the wrappers, and the tissues means that he had way too much unsupervised time on his hands last night. My bad. Come on, the Steelers were on!

Scrounging for crumbs in the van isn’t his typical hunting style though. He’s usually much more brazen than that. He’s more of a kitchen-counter dine and dash kind of guy. And he’s not very good at covering his tracks. Like the butter wrapper I found on the kitchen floor this morning after my shower.

Or the toothpaste tubes I used to find under my bed before I got wise and started keeping them out of his reach.

The kids are pretty good about not leaving food around. We watch out for each other if someone needs to leave the table, and it’s not uncommon to hear Bucket Head say to his siblings “Protect my food. I’ll be right back,” because inevitably, Bucket Head always has to get up and go to the bathroom the minute he starts to eat. He is Ike’s favorite source for unattended food.

But Ike’s appetites aren’t limited to food, tissues, and toothpaste. He enjoys a variety of toys and art supplies as well. Usually we can hear him unabashedly chomping away on something suspicious and can save the toy before he swallows it. Some toys, like this vintage Fisher-Price Little People girl, put up a really good fight and are hard to swallow.

But other toys, like the stretchy green skeleton that Bucket Head carried around for weeks after Halloween, go down silently and quickly, only to be horrifyingly encased like Han Solo in the black Carbonite. Lucky for you, dear reader, I just so happened to notice this little gem while we were playing in the yard not too long ago. Poor green stretchy skeleton. We will miss you. 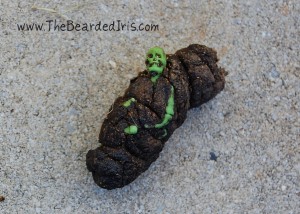 My husband, The Gatekeeper, would like you to know that he does not endorse my apparent affinity for scat photography or dressing the pets in Hanna Andersson pajamas.