The Elf on the Marriage Counselor’s Shelf

My husband and I are not seeing eye to eye on this whole Elf on the Shelf business.

No big surprise. He and I are polar opposites, of course. That’s how nature works. It’s all about propagating the species and the best way to do that is to mix up the gene pool.

So when I snuck downstairs a few nights ago to move Dobbie, I was not the least bit shocked to find that my husband had already dismantled this “killer” vignette: 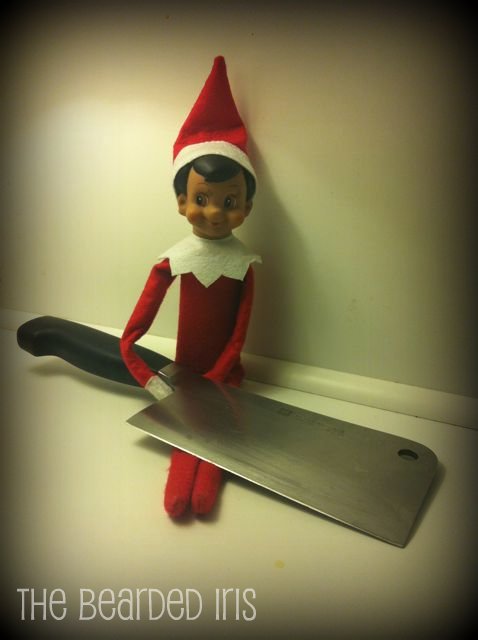 …and set up his own low-key scenario for the kids to find the following morning: 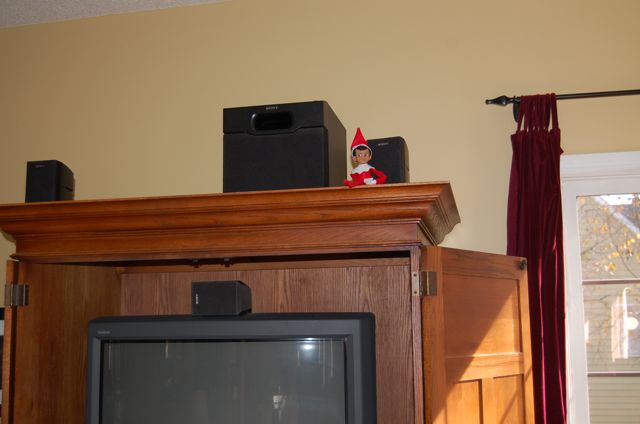 Oh how interesting. Elf on a Media Cabinet. {Yawn}

Oh no. This will not do, I said to myself. This is MY dance space.

I knew Martha next door was probably making her Elf do powdered sugar snow angels on her kitchen floor that very moment. There was no way in hell I would let my kids bear the shame of having to tell the other kids at the bus stop that their Elf just sat on a piece of furniture all night! BOR-RING.

So I grabbed a few simple props and voilá: 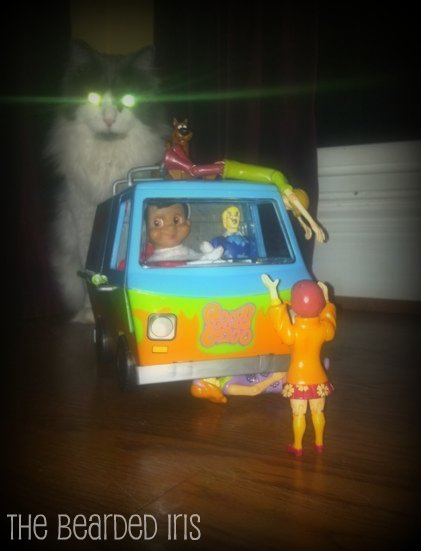 Instant drama. See how easy that is? Anyone can do it! Well, anyone but my husband. And not just because the cat avoids him like the plague.

(WARNING: Even without the demonic cat in the background, this scene may be a bit too macabre for many young children. My kids were fine with it. They watch a lot of Sponge Bob.)

Later that day after the kids were in bed, my husband beat me to the punch AGAIN and moved Dobbie for the night. He really outdid himself and moved the Elf to a totally different room. WOW – he so crazy! 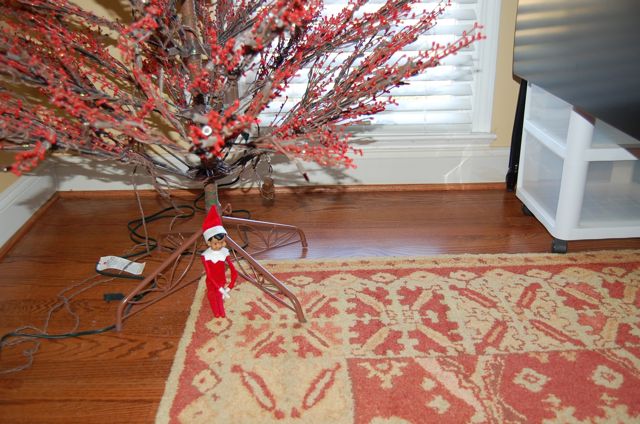 What? You moved Dobbie to a different room? HI-LARIOUS!!!

FAIL. Poor Dobbie looks sad and alone, not impish and merry! You know who else found his Elf like that one cold December morning? Jeffrey Dahmer, that’s who.

Luckily I arrived in the nick of time. “Step away from the Elf, husband. This is not a job for amateurs.”

Again, with just a few additional props, Iris and her trusty feline sidekick were able to save the day and enjoy a good chuckle at the same time: 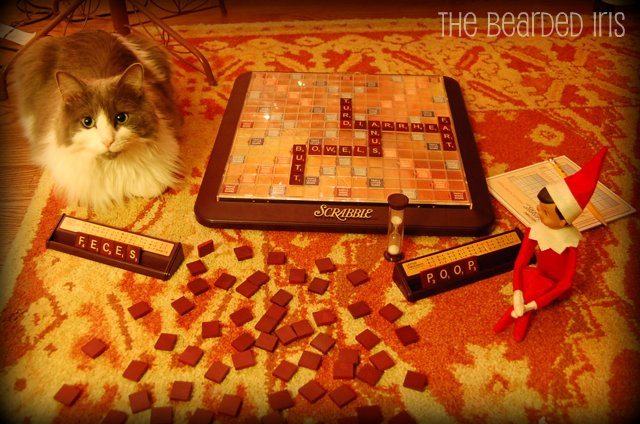 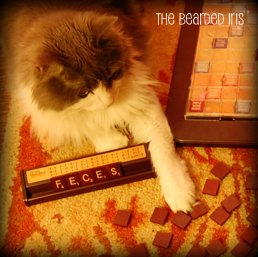 You’re pretty impressed by my cat right now aren’t you? Yes, Scat Scrabble appeals to multiple ages and species, let me tell you. All three kids thought it was awesome. The husband? Not so much. He’s just grateful I didn’t throw in one of my signature fake turds for extra oomph. (I actually did, but the cat is lying down right on top of it, honest to God. Bet she thought it was a little brown mouse. Damn.)

Luckily for our marriage, my husband catches on pretty quickly. Last night he just handed me the Elf (not a euphemism) and said, “I know you’ll just correct whatever I do, so here; have at it.” (Also, not a euphemism.) Is he well-trained, or what?!

In hindsight, I probably shouldn’t have defiled the collectible Rockwell Christmas Village that he had spent hours setting up just so earlier that day… 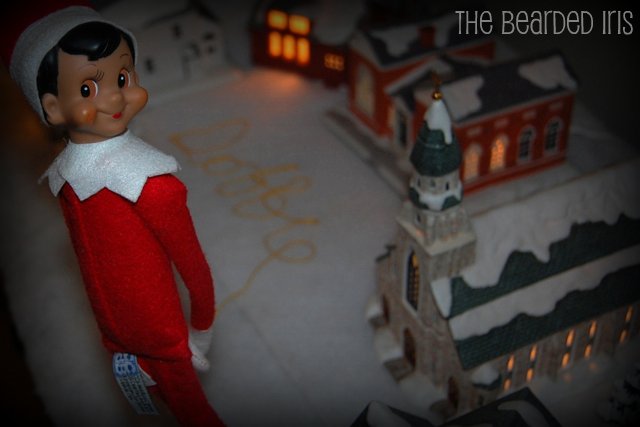 My husband was not amused. The kids sure liked it though!

Hey, just trying to keep the “Christ! Why do I even bother?” in Christmas. It’s a gift.

Oh stop it. You know my Mama dropped me on my head as an infant. But guess what! There are more of us out there! I found an entire subculture of other twisted Elfers. Wanna see? Then head on over to Baby Rabies and check out the fun contest she’s doing:

There are some hilarious entries! I’m submitting my Snow-Writing Dobbie picture. You’ll have the chance to vote for your favorite entries beginning on December 12th. Don’t worry, I’ll remind you.

UPDATE: Please visit the Inappropriate Elf Contest and click “Like” on #54 (“Dobbie writes his name in the snow”). Voting runs until Tuesday December 20th and the top three will be in the running to win an iPad 2. You can vote once a day, and you don’t need to register to vote! Can I get an AMEN?!

So wrong, but so right,