This post was originally published on 9/14/2008, but the timing felt right to dust it off and air it out. Hope you enjoy!

We were going to meet halfway between our houses and drive together.

Laura: “No, I’m on my way.  I’ll be a few minutes late.  We’ll make it though…we just have to be there 20 minutes before the class starts.   Did you bring a towel and a mat?”

Me: “What?  No!  I didn’t know I was supposed to do that.  DAMMIT!  They are totally not going to let me through the door.”

Laura: “Relax, Debbie Downer…wah-wah-waaaaaah (she injects the Debbie Downer trombone sound from the SNL skit).  It will be fine.  I’m throwing the minivan into turbo drive….I’m working the spoiler.  It helps.  People move out of the way when they see a minivan with a spoiler.”

OK.  Exhale.  We’ll make it.  This will be an adventure. Iris and Laura’s Most Excellent Sweaty Yoga Adventure.

During our ass-hauling over there we giggled about how sexy we would be coming home to our husbands all sweaty and stinky with our chakras aligned and pulsating.  Then Laura strategized out loud about not wanting to position her mat downwind from me, given my recent battle with prescription-drug induced flatulence.

Well, of course, it was further away than we realized, even with my masterful knowledge of the suburban back roads and short cuts.  We squealed into the parking lot of Bikram Yoga at 8:55 AM….five minutes before the start of class.  This was when Laura got a whiff of me and said, “Oh, did I tell you you’re not supposed to wear lotion or perfume?”  Ehh, noooooo.  I had on both.  And some really pungent Aveda hair stuff that is supposed to tame my white girl afro.  Yeah, there is no way they are letting me in.

But my fears were quelled at once when I saw the place from the outside.  The three cute awnings above the three windows read: “It’s”… “Hot” … “Stuff.”  Perfect.  I like this place already.  We were both pretty intimidated about doing “Sweaty Yoga” for the first time, but SO looking forward to it.  Hailed as the hottest new workout, literally, you basically do 26 poses of yoga in a heated room for 90 minutes. Supposedly, it is designed for all ages and all levels.  It increases flexibility and burns shit-loads of calories at the same time (up to 600 of ’em, dang!).  “The ideal complete workout.”  And even though we were both terrified about our vaginas not cooperating with the inverted poses and making all kinds of inappropriate noises, what with each of us birthing three ginormous babies a piece, we were gonna give it a shot… a hot, swampy, fog-horn sounding shot.

We watched a really normal looking guy walk in ahead of us with just a towel, no mat, and flip flops.  We agreed that he didn’t look very intimidating.  Maybe this wouldn’t be so scary after all. And look, there is a quote on the pamphlets by the door:

“Never too bad,
never too late,
never too sick,
never too old
to start from scratch again”
-Bikram Choudhury

OK.  Cool.  “Never too late.” This place is going to be awesome.  Deep breath.  Maybe they’ll cut us a break about being a little late, you know, just for good will.  Yogis are supposed to be so balanced and flexible. I bet they’ll be really nice.  Or maybe they’ll look at us and not be able to tell it is our first time there and not stress about how late we are. This will be ok.  Another deep breath.  No turning back.  Let’s do this!  Purposely, with confidence and enthusiasm, we pulled open the door.

And this is when we came face to face with HER….the Bikram Yoga Nazi.

“Don’t tell me this is your first class,” she spat in her heavy Eastern-European accent. “You’re LATE.  You are supposed to be here 20 mintues early for your first class.  I cannot possibly take care of you if you are not on time.”

Surrounding the Nazi in the reception area were about 20 very smug looking veteran Bikram Yoga enthusiasts in perfectly coordinated exercise ensembles drinking water from aluminum bottles and getting their well toned limbs and silicone boobs into the zone. Gawd, a public bitch slapping.  I hadn’t felt this unwelcome anywhere since the time I showed up at an AA meeting wearing my boyfriend’s Wheel of Fortune-style “Sometimes Alcohol IS the Answer” T-Shirt.

Absolutely SHOCKED by this kind of full-frontal confrontation so early in the morning, Laura and I both immediately assumed the “deer in the headlights” position. “Ummmm….Ooooo-Kay.  Well, can we have a schedule or something so we know when the next class is?”

“Fine,” she seethed, and practically threw two schedules into our stunned faces.  We turned on our heels and slunk out the door with our chins to our chests.  After the door hit us in the asses on our way out, we turned and faced each other and burst into the most delicious belly laugh we had shared since Palin’s nomination. “Wow, that is not at all what I was expecting.  Come on.  Let’s go get some Krispy Kremes or maybe some pork rinds.  And a drink.  Is it too early for tequila?”  I can’t remember who said that… I think I have post traumatic stress disorder.

Epilogue: We never went back to that place. I took up running instead. Then quit. But now I’m feeling like a slug and need to start exercising again. And one of my friends just started doing yoga (at a different place than the one described above), so I’ve been thinking about joining her there. And that reminded me of this story. The end.

So I arrive at the Vacation Bible School planning session the other day, pick up my handouts, and sit down with my two VBS buddies Terri and Kathy. We chit chat for a little while and then I start leafing through the three page legal sized spreadsheet that the VBS leader has put together with all the volunteers’ names and info.

And then I notice this across from my name: 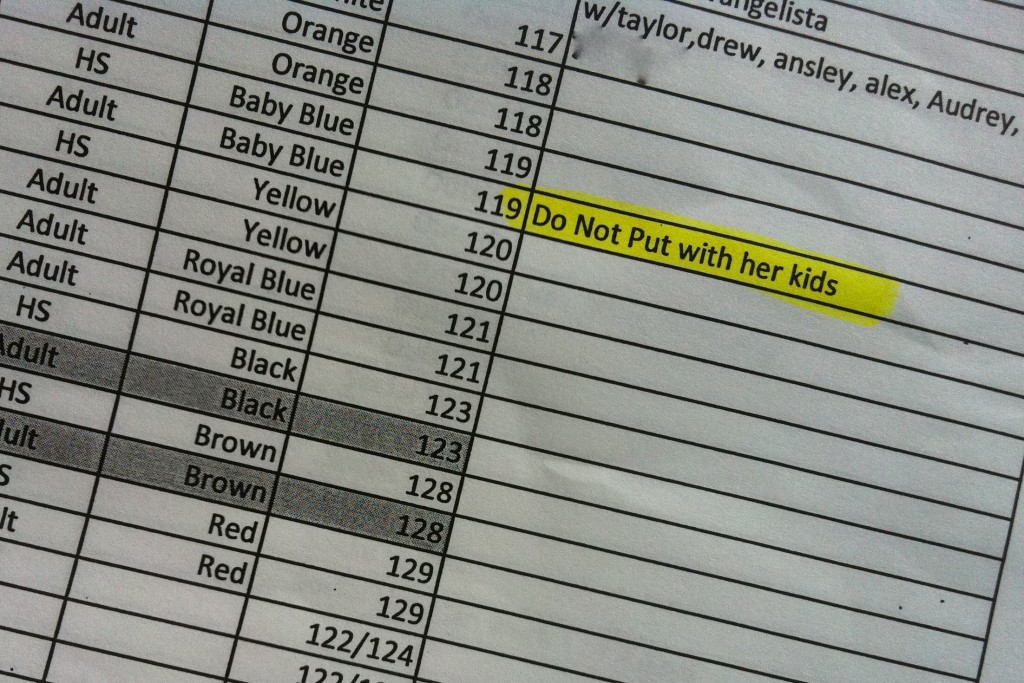 This was in the column labeled “Requests.”

And I did actually request that. Guilty as charged.

Sadly, I guess I didn’t understand the question.

Like when Bob Eubanks asked that couple on The Newlywed Game “Where’s the weirdest place you’ve ever made whoopee?” and the man said, “That would be in the butt, Bob.”

Naturally, I’m the ONLY mom who made this mistake, because all the other “requests” were for specific BFF co-teacher assignments. “Please put me with Amy Rogers! 🙂 ”

But I had NO IDEA it would end up on a public document and out of context like this!

When I entered those words in the request line of the VBS application, what I meant was simply that I thought my kids would have more fun if they had a teacher other than me. I’ve been Mini-Me’s catechist for the past 2 years, and before that I did the same thing for Nature Boy. And let me tell you something, it’s been no picnic, for any of us. I know how great my kids are, so I demand a lot from them and I think I have been harder on them than an unbiased, impartial teacher would have been. So, I did it for the kids! Really!!

But if you didn’t know that, and you saw “Do Not Put with her kids” across from my name, what would you think?

And now there are about 62 very nice church going moms who think the same thing about me. Just my luck. Good thing most of them don’t know about this blog, eh? Or they’d really have something to talk about!

My friends Terri and Kathy and I had a good laugh about it during the planning session. But on the inside, I was sitting there thinking, “Geez, Iris. You sure know how to make a good impression. Way to go, shit-heel.”

And then Terri talked me into volunteering with her for the very important VBS role of Bible Study Teacher, so now I will get to work with EVERYONE’S children, EVERY DAY, for a WHOLE WEEK.

Now who gets the last laugh?