I have not read Fifty Shades of Grey.

I realize this probably qualifies me as someone who is living under that proverbial rock, but so be it.

Because I am never going to read Fifty Shades of Grey.

My reasons are two fold: END_OF_DOCUMENT_TOKEN_TO_BE_REPLACED

So about that video I posted last Friday…

Over the weekend, it hit me like a ton of placenta teddy bears that I spend WAY MORE TIME online than anyone else I know in real life.

And when you combine my ginormous Internet-based catalogue of bizarre tidbits with the fact that I am not currently drinking, you have the makings for some pretty darn awkward cocktail conversation. We’re talking, “Hey, does this mole look weird to you?” banter. Eeeek.

Rest assured, this will not be much of an issue moving forward because I am either going to become a complete shut-in or I am going to start drinking again just so I can remotely begin to tolerate myself.

But in the meantime, it has dawned on me that some of my readers probably didn’t get the pop culture reference I was trying to poke fun of with my video last week.

Yes, that video was actually a parody (or rather an attempt at a parody) of several recent news stories that caught my eye.

Maybe if I take a step back and explain the background, the video will make more sense.

(Although, in my humble opinion, if you have to explain why something is funny, it really isn’t that funny. And now I’m explaining it, even after that explanation, which is just weird. Ew. Don’t look at me, I’m hideous.)

But here’s the background story just in case you want to know more about why I would ever do such disgusting things (for free…with children…and food…on camera. Oh God, I should be in jail, shouldn’t I).

About two weeks ago I caught a quick teaser on The Today Show about how actress Alicia Silverstone had a “unique way of feeding her baby.”

Oh those morning news show producers are so clever, aren’t they? They always manage to trick me into staying tuned for what promises to be the most unbelievable story EVER!

And for once, I can honestly say, I was NOT DISAPPOINTED!

They actually showed footage of Alicia Silverstone pre-chewing her 10 month old baby’s food and feeding the baby from her own mouth.

It was truly shocking. And also, it was mom-blog GOLD ON A STICK! I couldn’t WAIT to Tweet it, and Facebook it, and blog about it, oh my!

Listen, I do some pretty gross things. My version of “the 5 second rule” is more like “meh, this is from today right?”

And yet, even I was disgusted by Alicia Silverstone’s parenting style.

But I think I was less put off by the physical component of passing masticated food from mouth-to-mouth and more revolted by the notion of doing something for a healthy child that they should do for themselves.

On top of that was another recent news story on NPR about an Easter Egg Hunt in Colorado that was cancelled due to parental aggressiveness.

Swear to God, couldn’t make it up if I tried: parents hopped a rope fence and swarmed the field determined to get their kids a plastic egg.

Normally, I try to model a “live and let live” attitude about parenting. Who am I to judge?

But more and more I’m confronted with examples of egregious “Helicopter Parenting.” This is the popular name given to parents who hover over their children and are super controlling about every element of their lives.

Outlandish scenarios like these are the stuff that humorists dream of. Sure, it might be mean, yes, it might be gross, but oooh-la-la…is it ever good material!

So my video last Friday was my own little way of contributing to the conversation and sharing my two-cents about how ridiculous helicopter parenting can be. Some of the scenes that were cut due to time limitations were of me doing my kids’ homework for them and me cutting my 12 year-old’s food and feeding him with a fork while cooing “open wide for the choo-choo-train!” It’s funny (to me) because it is so ridiculous and yet Helicopter Parenting is SO hot in the news right now.

And it’s not just eccentric celebrity parents either. I know one mom in my own suburban middle class neighborhood who goes online every afternoon, prints out her middle school son’s homework for him (as posted online by his teachers), and files the assignments into color coded hanging folders for him so that when he gets home from school (after she picks him up by car so he won’t be exposed to the dangers of public transportation), he can get started on his homework without delay.

I find this utterly ridiculous. I would no more do this for my son than I would pre-chew his food.

Is she going to go away to college with him and organize his daily workload there too?

I’m no model parent by any means, but I’ll be damned if I’m going to raise a bunch of helpless namby-pamby kids who can’t even chew their own food or find their own Easter eggs.

And that is all I have to say about that.

Now that you know more about the inspiration for my video last week, which was intended to be an over-the-top-parody of current events, perhaps it makes more sense and is (hopefully) more entertaining.

Or maybe it’s still as gross to you as it was last Friday, in which case, please have some pity for me. I’m definitely not right in the head. 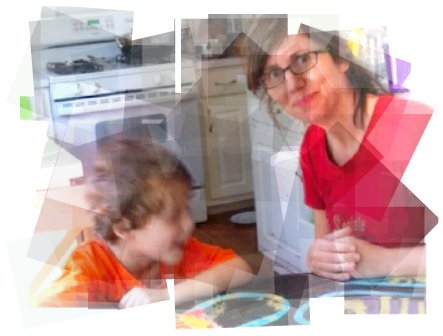 sincerely yours and with even more social awkwardness than ever,

PS – does this mole look weird to you?