What I Wore Wednesday: Does this Boy Scout make me look fat?

Well, damn. This whole What I Wore Wednesday business is much harder than I thought it would be.

For starters, I can’t figure out how to take a decent full body picture of myself.

I wonder how this chick does it? She always looks so dang cute!

Secondly, my kids are shitty photographers. 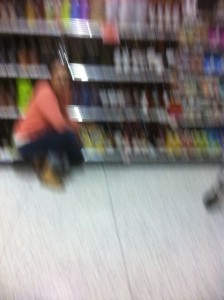 I hate asking my husband to take pictures of me because I don’t like to expose him to my self-deprecating freak outs more often than absolutely necessary.

And above all, seeing these pictures and feeling so vulnerable has been really difficult. If it’s true that “the camera don’t lie,” I’ll pass on the brutal honesty, thanks anyway.

Of course, timing is everything.

Ever have one of those days when nothing you put on feels right? I’ve been having about a week of those.

On a related note, are you familiar with the book The Red Tent by Anita Diamant? Great book. Love that book. But I totally get why menstruating women were temporarily banished from the tribe back in ancient times. If my female ancestors were anything like me, it was a safety precaution for the rest of the tribe.

Aunt Flo and I were feeling extra moody and uncomfortable on Monday. Even my “fat jeans” were too tight. After about five outfit changes, this is what I finally settled on wearing for the day: 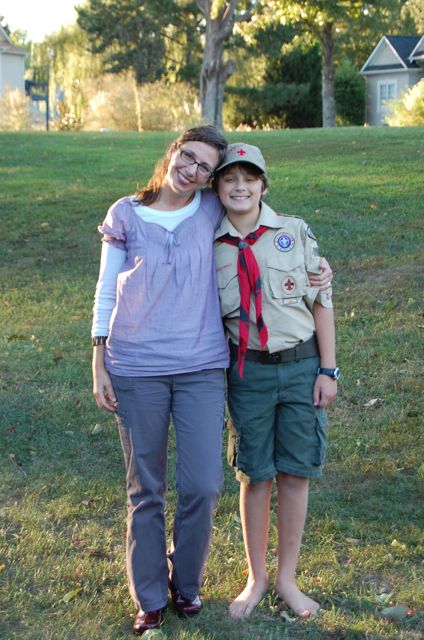 "Does this Boy Scout make me look fat?"

Comfy, yes, and a step up from sweatpants, but still, not very flattering. The whole point of me wanting to participate in WIWW was to become less of a schlub.

Let me tell you something about that top. I bought it at Target last spring, but I’ve only worn it a couple of times. Every time I put it on, I feel frumpy. It’s too big and it’s totally see-through, so I have to layer it. Half the times I try to wear it, I take if right off and it stays on “the pile” until I get motivated to put my clothes away.

Early Monday morning, after trying it on yet again to see if it would hide my bloated muffintop, I gave up on it for good and finally tossed it in my Goodwill bag. I really struggled with that decision since it is the only new top I’ve bought all year. I’m not much of a clothes shopper.

Five minutes later, wracked with guilt and frustration, I retrieved it from that bag and tried it on again, this time to mask a clingy long sleeved t-shirt that was making me look like I had a low-hanging third boob. Success! It hid my spare tire. Moving on.

Right after dinner we went outside to snap this pic and when I saw it I almost puked. “Is that what I looked like all day? Holy CRAP you guys, why didn’t you tell me?”

“I think you look pretty, Mom,” Nature Boy sweetly tried to comfort me.

I burst into tears.

Feeling bad, I put the kids to bed and assembled the troops: 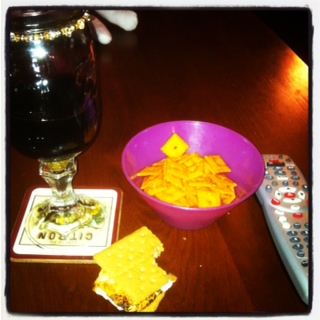 That’s my new Hillblingy Goblet half-full of red wine, a bowl of Cheez-Its, an impromptu S’more I made on top of my gas stove, and the remote control. Misery loves company.

By the way, that Target top is now back in the Goodwill Bag, which I moved to my car to avoid the temptation of trying it on yet again.

The next day (yesterday) was my husband’s birthday. We had lunch plans so I wanted to tart it up a little. I did my hair. I put on makeup. I grabbed the prettiest t-shirt in my closet. But still too bloated for jeans, I threw my frumpy cargo pants back on and tried to cover up all my jiggly bits with a sweater.

As we were walking out the door I asked my husband to snap a quick pic of me for this post.

This is the picture he took: 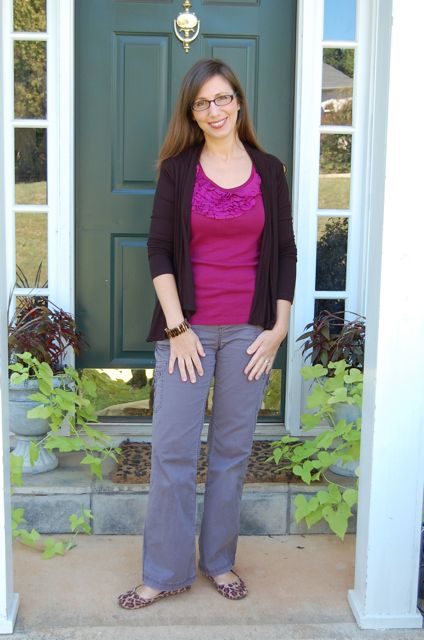 But what I saw was this: 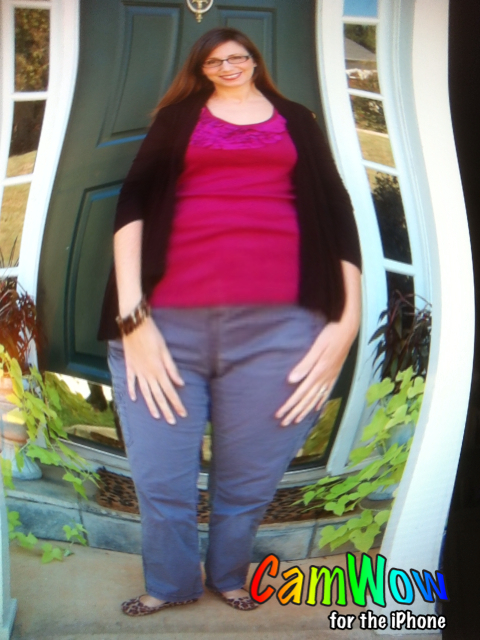 “Ew! Do I really look like that? OMG! Wait, let me turn sideways so it’s not so full frontal.” 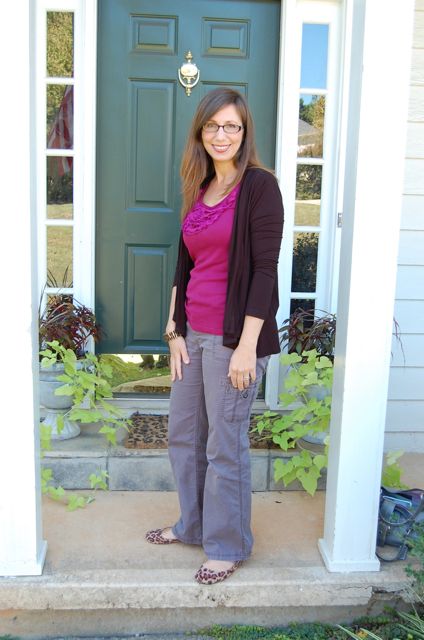 CRAP! Nice posture. Here’s what I see when I look at that picture: 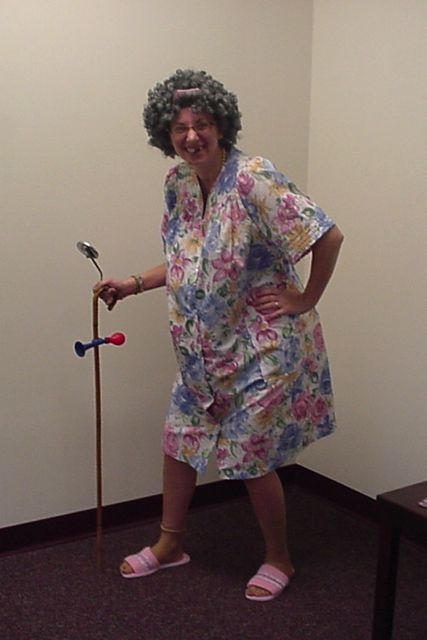 Day-amn. Body Dysmorphic Disorder, anyone? Looks like someone needs a session with Stuart Smalley.

But until I can get in to see him, maybe I’ll just self-impose a new rule: no more WIWW until Aunt Flo is gone and takes my bad attitude with her.

Also, while I’m feeling so crappy, I think I’ll continue to brutally purge my closet before my bloating subsides and I feel less critical about myself and my pathetic wardrobe.

But now, if you’ll excuse me, I have a hankerin’ for more birthday cake and a bag of potato chips.

Until we meet again, I remain, your frumpy friend,