So that was what all of our family Halloweens looked like BBH (before Bucket Head).

Once he joined the party in the spring of 2007, things got exponentially more challenging for me. To cope with the extra workload, I bought Mini-Me’s costume at Tarjay, wrapped Nature Boy in muslin rags from my fabric stash, and put Bucket Head in a brown fleece onesie/hat combo, claiming he was a baby bear.

We trick-or-treated that year with some friends whose child had a full-blown meltdown if he wasn’t the FIRST to ring the door bell at every.    single.    house.  And his parents bickered the entire evening about the best way to manage their son’s obsessively competitive nature. Meanwhile, Nature Boy’s muslin mummy rags were unraveling with every step he took and he would not stop whining about how much he hated his costume. I drank copious amounts of wine from my cleverly disguised travel coffee mug to deal with the stress. 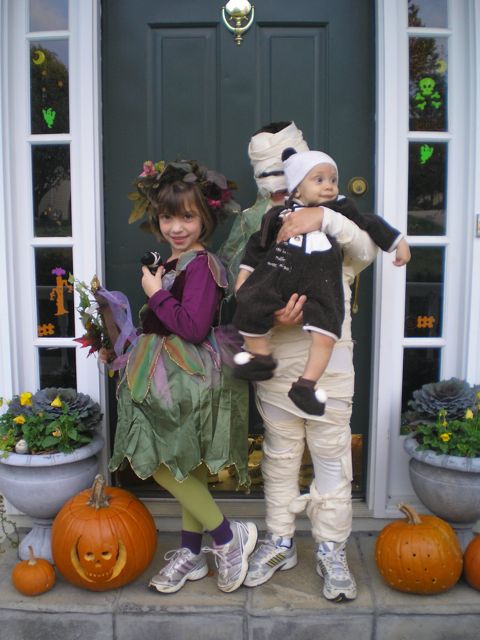 The best part about that year was watching Mini-Me carve a pumpkin with a power drill. 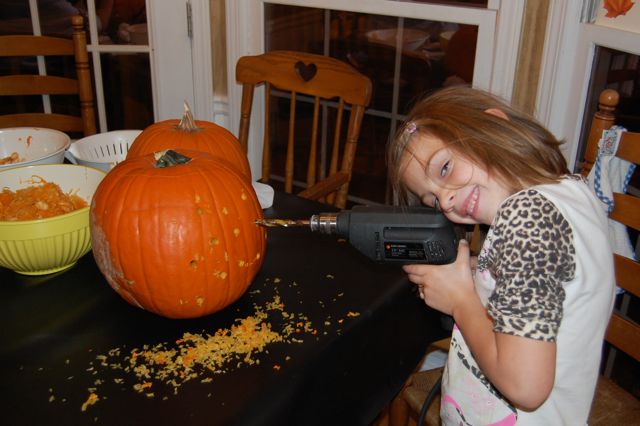 "Nothing comes between me and my Black & Decker."

Honest to Pete, if times ever get tough, I’mma just rent her out to do demos at The Home Depot.

By 2008, I was starting to regain my will to live. Of course, all that illegally obtained prescription speed might have had something to do with it.

That was the year my two big kids wanted to be werewolves. 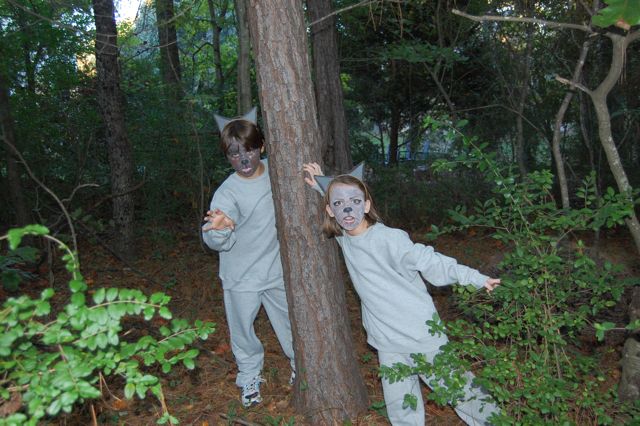 They think they're werewolves...

Little did they know, for the first time in 8 years, Mommy was going to dress up too… 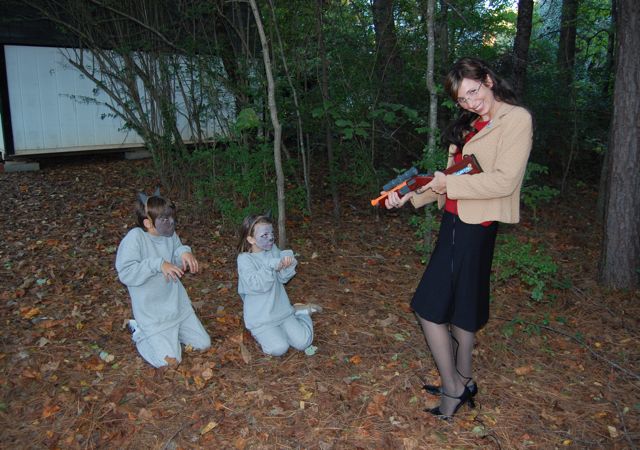 ...but I called them "target practice."

That was the year Mama Cloud moved into my neighborhood and we became fast friends. I love to joke about the fact that she’s technically young enough to be my daughter. That gave her a great idea. Look who showed up to trick-or-treat with us that year: 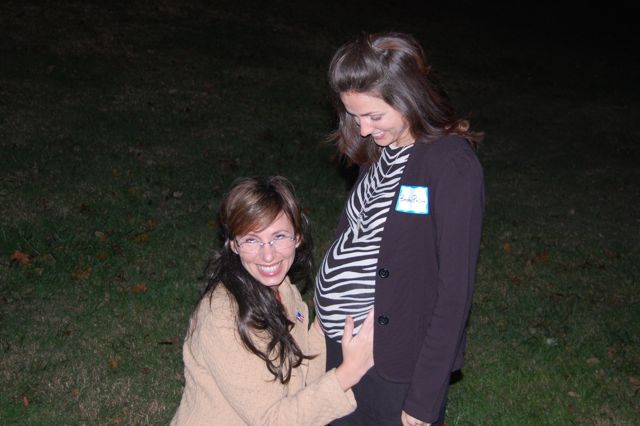 Iris and Mama Cloud as Sarah and Bristol Palin, Halloween 2008.

Here in North Georgia, this ensemble went over like a blender full of kittens. Live and learn. At least I now know which of my neighbors own pitchforks if I ever need to borrow one.

Bucket Head was 18 months old that year, so we dressed him all in red and told him he was Elmo.

He was pretty fucking terrified by the whole experience. 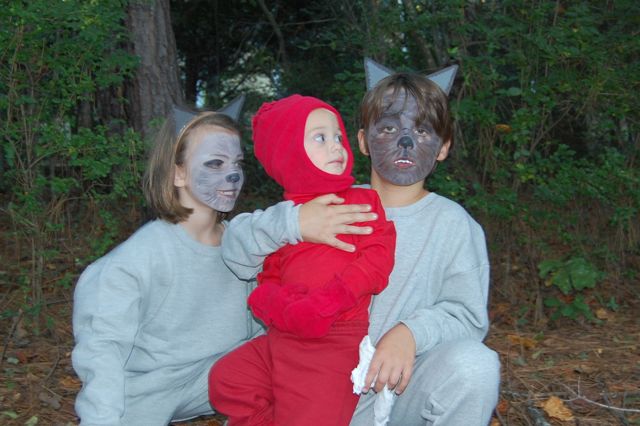 The face says it all.

It sure was fun to dress up again! But sadly, that spunky groove was short lived. I abandoned my burgeoning blog so I could help Mini-Me through a rough patch in Kindergarten. She had just been diagnosed as having sensory processing challenges and it was translating into behavior issues at school. By the time we got to the next Halloween, I was pretty tuckered out and told the kids they had to make do out of old costumes and stuff they could find around the house. I like to call this move “fostering independence.” 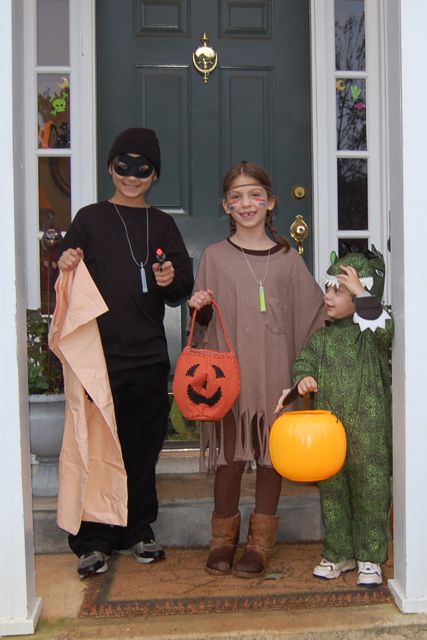 As you can see, they did pretty well on their own that year. Noted!

Which brings us to last year. That was the year I turned 40 and ran my first 5k race. Mini-Me had a great teacher who appreciated her uniqueness and was thriving at school. Bucket Head finally figured out how to buckle himself into and out of his own 5 point harness car seat…always a milestone for me of light at the end of the tunnel!

And I was well enough to dress up again with the kids. Even The Gatekeeper got into it for the first time ever.

We asked my 81 year old father-in-law to take a picture of us: 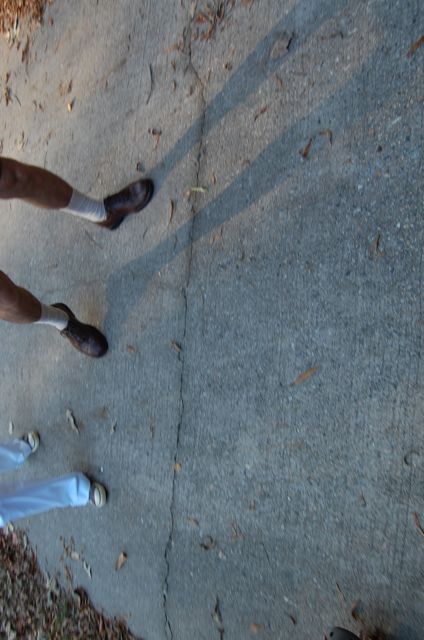 And that’s just how he operates a camera. You should see him drive a car.

Luckily, one of my brothers-in-law was standing by: 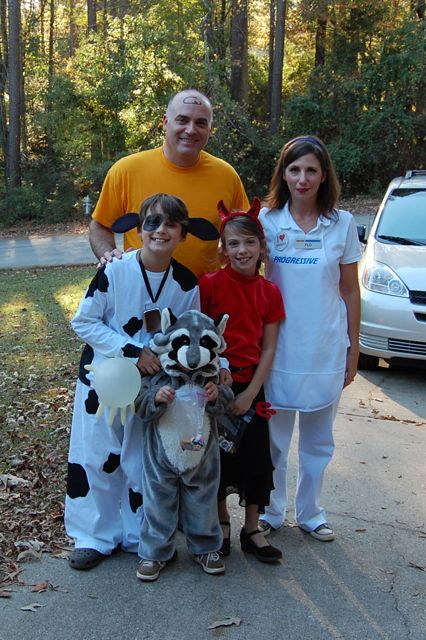 Nature Boy made that cow costume all by himself! It was so cute. I bought that raccoon costume for $5 at a consignment sale. Mini-Me, well, what can I say? At least she didn’t want the Naughty Nurse costume (yet).

But my favorite picture from last year: 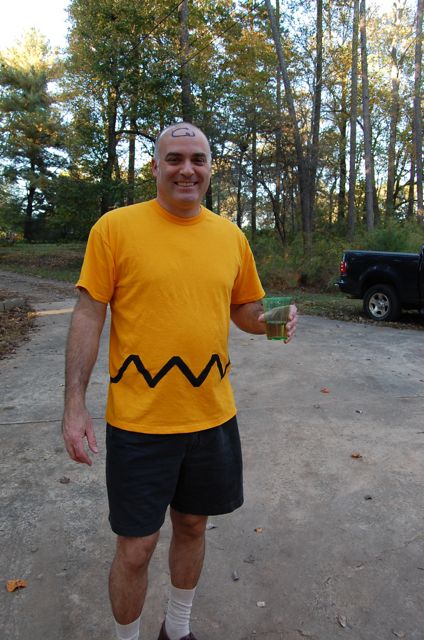 I mean really. What a good sport! He totally let me paint that squiggle on his big bald head. I sure do love that man.

Sadly, we went to a family-friendly costume party where we ended up being the only adults in costume. The Gatekeeper is scarred for life, bless his heart. Also, note to self, it’s a good idea to know your audience before attending a costume party. A majority of the guests at this shin-dig were the kind of folks who don’t have cable TV. (On purpose.) (I know!) So most of them didn’t know who Flo was. I kept getting asked if I just got off work. Pearls to swine, I say.

What are the kids dressing as this year? Who are we trick-or-treating with? Will The Gatekeeper join in the fun or is he still licking his wounds from last year? Is Iris too mentally ill to bother with a costume? How much alcohol will be involved? Will Nature Boy be permitted to trick-or-treat with his friends and no adult supervision? All these questions and more will be answered tomorrow.

Come back then for a very special All Saints Day/Halloween Hangover edition of The Bearded Iris: A Recalcitrant Wife and Mother Tells All.

This is what I have:

But this is what I want:

Ahhh.  Just looking at that neat storage brings my blood pressure down a notch.

And so on Monday while we were at home for MLK day, the kids and I began the process of organizing a decade’s worth of Legos by color. It all began because I was watching Nature Boy dig through our coffin-sized clear plastic bin to find one tiny special piece that he absolutely had to have for what he was building. It was actually the deafening sound of that digging… that relentless, high pitched digging. Can you picture it? The sound that several million little plastic pieces make when being rubbed against each other in a sound amplifying plastic box? Not pleasant.

The process of sorting Legos by color, I must admit, is actually a bit therapeutic. Swishing your hands back and forth through all those little sharp-cornered plastic bits feels pretty good on the ol’ meat hooks. I’m surprised, frankly, that Mini-Me hasn’t taken off her shoes yet to walk through the pile since she has such a penchant for unconventional sensory input devices. I once witnessed that kid whip off her shoes at The Bead Bayou and plunge her sweaty little tootsies into a  bowl of Swarovski crystals as I ran in slow motion toward her shouting “Nooooooooooooooooo!” My apologies to the Beading Community at large… for my lack of parental control in addition to the very likely possibility that your beads smell like Fontina cheese.

My innately work-averse Nature Boy is very excited about the potential outcome of this project. He loves the idea of being able to find what he wants without having to work so hard in the future. He’s not so keen, however, on helping me sort. And the other two are about as useful as poopy flavored lollipops (quick – name that movie!). So… this might take a while. If you’re looking for me, I’ll be in the basement.

Nature Boy also pointed out to me that separating black and white Legos on Martin Luther King Jr. day is just plain wrong. Damn, that kid is such a mench. And no, he still hasn’t ever won a Principal Pal Award, thanks for reminding me. Bet Dr. King never won one either. All that aside, the overall spirit of the Lego Sorting Project was to serve my children and support their creativity. Oh, and to put the kibosh on that hellish digging sound. But mostly, to serve others. And get a free hand massage.

“Life’s most persistent and urgent question is, ‘What are you doing for others?'” – Dr. Martin Luther King, Jr.