There was a story on the Today show yesterday morning about couples having plastic surgery together.

I was choking on my All Bran too hard to hear the whole thing.

“The look is natural and appealing to everyone,” says BOTOX® patient Nancy Emmitte of Fort Worth, Texas. 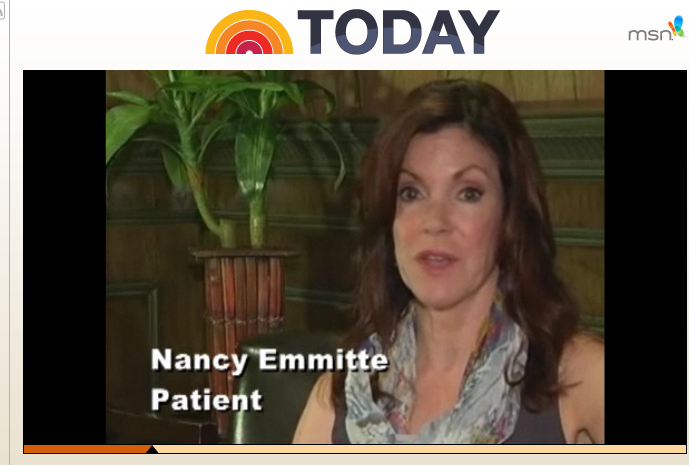 Clearly “natural” means different things to different people. Like the people who call MSG “natural flavoring” on the back of the Ramen Noodles bag.

Nancy, you look so familiar to me. I can’t place my finger on it, but you definitely remind me of someone. Hmmm….

Is it this lady? 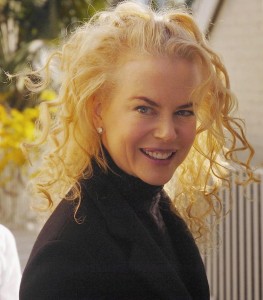 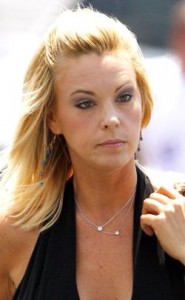 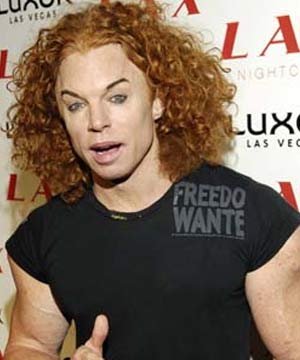 There you are! Hello, you.

I’m often the last one to know these things, but is there a new beauty trend? The higher the eyebrow arch, the closer to God? Why would anyone want to always look so surprised?!

And this look requires needles, people. Needles in the face. Needles filled with live botulism… a toxin that paralyzes your facial muscles so as to flatten out those pesky furrows.

But hey, to each his/her own. Who am I to judge? I have a beard! You say po-TAH-to, I say Pinot Grigio.

But this isn’t just about Nancy. Women have been doing stupid shit to themselves in the name of “beauty” since the beginning of time. What makes this story special is that Nancy’s husband Nick is going with her and having his own BOTOX® injections so he can “keep up with” his wife’s good looks. 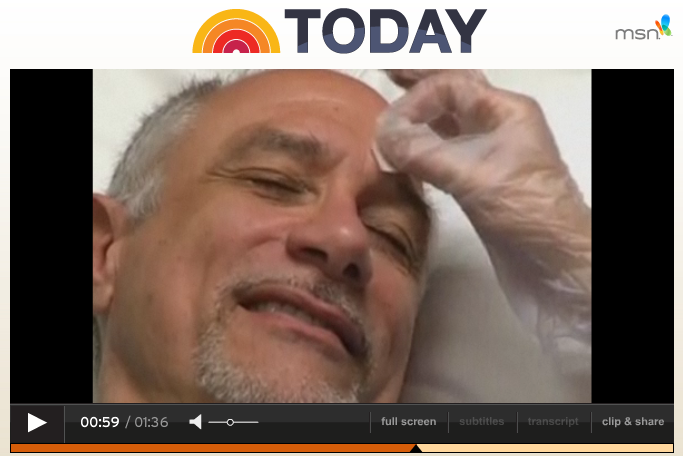 Pack your emergency kits, folks. This is surely the beginning of the apocalypse.

“Make me look like I’m not mad,” said Nick right before the Nurse Practitioner jabbed him with a poison filled needle right between the eyes. Youch!

Ironic. I would think dropping $400 every 4-6 months to temporarily paralyze your forehead with injectable toxins would actually make someone feel, and thus look, MORE angry. Maybe Nick wouldn’t have so many deep set wrinkles if he wasn’t blowing his money on “his and her” Frankenfaces.

Not to pick on Nick and Nancy. Their friends are doing enough of that for all of us.

I don’t know what burns my biscuits the most about this: the pandemic of low self esteem or the ridiculous amount of money being spent on something so shallow.

According to Today, Americans spent nearly $10.7 BILLION on procedures in 2010, which was up 9% from the year before. Is there really that much extra money floating around our country? Damn. Can I have some?

“People are trying to look more well rested, younger… trying to get jobs, maintain their jobs, get clients… I think that has a lot to do with it,” speculates Vanessa Sisson, Nurse Practitioner.

I get that. This would be a scary time to be without a job.

But you know what else is scary?…facial paralysis.

Get that toxin injected too deep or too low, and HOLLA… you don’t look well rested or younger. You look like Droopy Dog.

I don’t know about you, but if I’m hiring someone, I’m probably NOT going to pick the guy who looks like he might fall asleep with his face in the soup at our next big client luncheon.

And the idea of couples doing this TOGETHER? This isn’t tennis, or golf, or a wine tasting. This is an elective surgical procedure.

D’ya hear that Nick and Nancy? No rubbing. No lying down. You don’t want your new BOTOX injections to migrate to your eye area and cause blindness! Then you wouldn’t be able to see how hot you both look.

I just don’t get it. But then again, I don’t get a lot of things…like Planking, or Owling, or butthole bleaching.

We need a revolution. We need brave men and women to take a stand against this ridiculous pressure to look young. And the revolution is going to have to start from within. We have to stop comparing ourselves to the photoshopped or surgically augmented images we see in the media and start accepting and loving ourselves for who we are.

And this needs to happen now. Our children are watching. People are hurting themselves, exposing themselves to ridiculous risks, and in the end, they are looking worse than when they started.

Remember when we were teens and we slathered ourselves in baby oil to get that savage tan (while sneaking our moms’ Virginia Slims). And now we’re all having suspicious moles the size of nickels removed from our backs? (No? Just me?) And here we are decades later buying sunscreen shirts for our kids and putting on hats and sunscreen before we even go outside to get the paper?

What are all these BOTOX-ed people going to look like in 20 years? 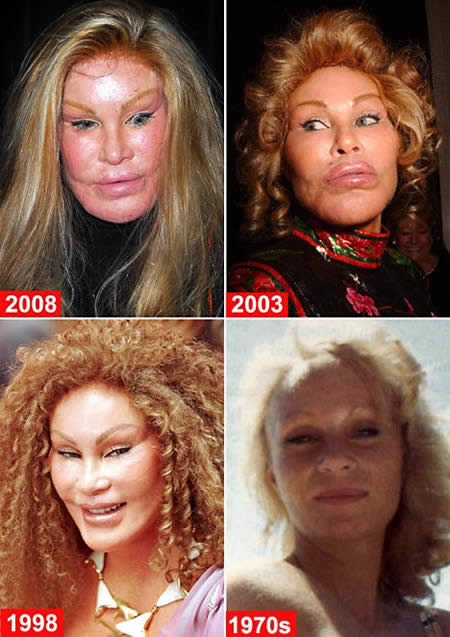 Go look at yourself in the mirror right now and tell yourself, OUT LOUD, three things that you love about yourself. Bonus points if you get nekkid first. Go ahead. Do it. I’ll wait.

Now start taking better care of yourself, from the inside out.

PS – I have no way of controlling the ad that is going to appear below. If it is an ad for plastic surgery, DO NOT CLICK IT. I beg you.

Had to take the youngest to the dermatologist the other day to have a weird warty thing on his earlobe removed. We actually had it burned off once before, but it grew right back like a mini devil horn.

Wanna see it? You know you do. See? It’s even shaped liked a horn. Told you!

Bucket Head/Spider-Man called it his “Molpie Thing,” and it was as much a part of him as his curly hair and perma-wrinkly sucking thumb. We ignored it for a long time when it grew back, but it recently got to the point where his teachers and peers were commenting about it and making him feel bad. Fuckers.

Here’s what it looked like from another angle. Once I realized it had a face, I knew it was time to part ways. I have enough mouths to feed. So off to the dermatologist we went.

Now let me tell you something, the dermatologist’s waiting room is not the place to be if you have a poor self-esteem.

Everywhere you look there are reminders of what’s wrong with the way you look and how you can improve it.

“When your neck looks younger, so do you.”

“Show your frown lines some love!”

“Ask about Sculptra Aesthetic… the first facial injectable that gives you subtle results over time.”

“Inadequate or not enough lashes? Ask your doctor if LATISSE is right for you.”

Jesus H. Christ. I get it, I get it. My face, my neck, my hands, even my tiny little eyelashes are all not good enough. Great. Thanks for that, evil marketing geniuses. Just the little boost I needed today. As if I don’t have enough on my mind imagining how it will be to once again hold my screaming three-year-old down while a doctor snips and cauterizes an inch away from his little face.

Needless to say: not a pleasant experience, before, during, or after.

But it got me thinking…

I don’t have great skin. I’m 40 years old and I spent every summer of my youth sautéeing myself in baby oil and sea salt. I have pictures of myself as a tween/teen/young adult where my sunburns were so bad I looked like I had been pulled out of a lobster pot. Add a sprinkling of adult acne, some patches of melasma leftover from pregnancy, a handful of suspicious moles, my infamous hormone-induced facial hair… and we have the makings for a dermatologist’s wet dream. Seriously, when I walk into my dermatologist’s office it’s like Norm walking into Cheers.

I’d like to help you avoid the same fate, so for today’s Just the Tip Tuesday post, I’m going to share with you the best skin care tips I never followed but wish I had. Some of these are so basic, I’m sure you know them already. But there might be a few new ones you didn’t know, so don’t leave before we pull out the pimple shaped piñata, okay? Here we go:

1.) Wear sunscreen everyday. Put it on your face, neck, and upper chest. Bonus points if you remember to spread it on the backs of your hands.  Seriously, my step mother won’t even go out to the mail box without her sunscreen and she has awesome skin. 2.) Wash your face every night before bed. My mother in law is 81 years old and doesn’t have a single deep set wrinkle on her face. She had 12 children, so I suspect that she was so busy living in a shoe and all that her face never saw the light of day. But in addition to that, she swears by Cetaphil cleanser. Buys it in bulk at Costco. Trust me, she is gorgeous.

3.) Apply eye cream with your ring finger. The skin surrounding your eyes is the most delicate skin on your face. Your ring finger is the weakest finger on your hand. The two are a match made in heaven. Also, a cosmetologist once told me that there are no oil glands around your eyes. Don’t know if that is true or not, but the look on her face when I told her I wasn’t using eye cream? You would have thought I had just confessed to making out with Hitler. I now use eye cream. And I always apply it with my ring finger. You should too.

4.) Don’t frown so much. They’re called frown lines for a reason, duh.

5.) Drink more water. No brainer. We all know it. But if you are anything like me, it can be hard to squeeze the water in between the coffee all morning and the wine all afternoon. Best tip for that I never follow is to drink a small glass of water every hour on the hour. Set your watch or smart phone to beep every hour to remind you… it will become a Pavlovian response.

6.) Don’t wear panties to bed… they cause cellulite! Seriously. Not making this up. Side benefit: also a marriage enhancer.

7.) Get your beauty sleep. This is critical for cell regeneration. Just make sure you do it nekkid from the waist down. See above.

8.) Pick it with your elbows. This one comes from the home office… passed down from my father and his father before that. To clarify, they were talking about zits and not splinters or lotto scratch off tickets.

9.) Gently push back your cuticles after every bath or shower. I never do this and my hands look like feet. Man feet. My sister in law Teresa has the prettiest hands you’ve ever seen. She does this. Seriously, bitch could be a hand model.

10.) Lay off the liquor. Experts say that more than one drink a day can lead to increased oil production and enlarged pores. Fuck my life.

And now, as promised, a pimple shaped piñata. Just make sure you pick it with your elbows.