Aw, nuts. Or, how puppies and testicles are related. 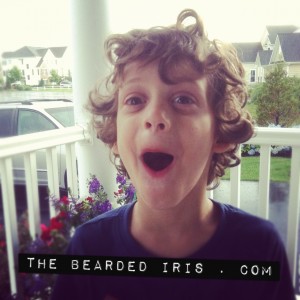 It all started with a routine trip to the local dog park. There was a beautiful grey Pit Bull Terrier there who was unneutered. Every time he ran past us, my son Bucket Head would giggle, point, and enthusiastically blurt “Look at those things hanging from his butt! He’s got butt-hangers! That’s silly!”

It was very entertaining to the guy sharing our bench. He and I sheepishly made eye contact and I shrugged my shoulders as in “He’s five. What am I gonna do?”

Butt-hangers. That’s a new one. I made a mental note to tell my husband so we could laugh about it later.

Now, it is a widely known fact that I enjoy making up new words for genitals possibly more than anything else in life, but when it comes to my kids, I’m a stickler for proper anatomical verbiage. Never underestimate the power of pretty teeth and a good vocabulary. Just imagine the reaction Michigan House Rep. Lisa Brown would have gotten if she had referred to her “vagizness” or “goody basket.” Not kosher.

Yes, I was bound and determined for Bucket Head to learn the correct terminology for his fruit salad. So later that night, during Bucket Head’s bath, I reminded him of the Pit Bull and his silly “butt-hangers,” and then said “You know, you’ve got those too. They’re called ‘testicles.’”

“WHAT?! I have butt-hangers like that dog at the park?!” His face snapped away with a bang and his eyes immediately focused in on his happy place.

“Yes honey, all boys do. Your brother and Daddy do too. And they’re called testicles, not butt-hangers.”

“I thought that was called my penis,” he replied, confused.

“No, your penis is the thing you pee from and your testicles hang down under your penis…they’re in that wrinkly thingy which is actually called a scrotum.”

“Oh, you mean my lumpy things?” he asked as he grabbed his little nutsack and attempted to yank if off to examine it more closely.

“Dude – be careful with that thing!” I cautioned. “I want grandchildren someday!”

Unfazed, his neurons started to fire. I could see the proverbial lightbulb appearing above his curly little head. I could also sense that his mouth and his brain weren’t on the same page. That happens a lot due to his speech impairment. “But Mom? Ike (our dog) is a boy and he doesn’t have cuticles.”

“Where are Ike’s tentacles.”

“Testicles. They’re called testicles, honey. We had them removed when he was a puppy.”

“Because we didn’t want him to make puppies with other dogs.”

“THOSE BUTT-HANGERS TURN INTO PUPPIES?!”

{OMG} “Testicles, and no. But dogs who don’t have butt-hangers, I mean testicles, can’t make puppies.”

I don’t think he heard that last part though because he had commenced kneading his scrotum like a flesh colored foam stress ball. I wasn’t sure if I should turn my back and give him some privacy, smack his hand away and tell him to “drop it,” or start searching WebMD for emergency testicle rupture advice.

The next few days were touch and go…literally. Bucket Head was absolutely riveted by his newfound anatomy. I honestly think he was watching his gooch closely to see if it would morph into a small litter of puppies.

At one point I had to pull him aside and gently direct that he go and explore his testicles in the privacy of his own room or in the bathroom behind a closed door. He was fine with that.

The next morning, Bucket Head walked by my husband with a look of determination on his little face. “Where are you going?” his Daddy asked.

“Okay. Thanks for the update.”

My husband immediately came to find me. “Did you know that Bucket Head is going upstairs to explore his testicles?”

“Yeah. Sorry, I forgot to tell you. He’s totally into his junk now.”

“He saw an unneutered dog at the park the other day. He’s been obsessed ever since. I’m trying to encourage him to stop dropping trou in public.”

“Oh—and honey? If he sees you naked, he might think he’s getting a puppy.”

This isn’t the first time Bucket Head has let his freak flag fly around dogs. If you liked this post, you should definitely read about the phase he went through last summer.

Aw, Nuts. Or, How Puppies and Testicles Are Related.